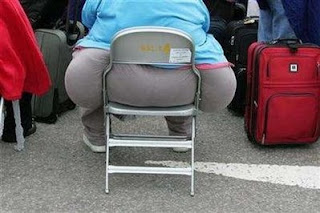 One factor that contributes to this phenomenon is the fact that fat mothers produce fatter offspring. In some senses this is not surprising. If there are genes that predispose to obesity, those will be passed down from parents to children. If there are lifestyle choices that contribute to an increased BMI, children will learn those by example from their parents.

What is not expected is the presence of a multiplier effect in generational obesity. In both rats and mice that are susceptible to obesity, a fat rodent mother gives birth to offspring which will become fatter than she was, and they, in turn, give birth to pups which grow up to be fatter than they were. The same phenomenon happens in humans. It is harder to observe in humans because it takes decades to progress from mother to daughter to granddaughter, while rodents can easily produce several generations in a few months or years. In rodents it is also much easier to control for genetic and environmental factors.

In both rodents and humans, the cause of the multiplier effect has not been established. It could result from a relatively high blood sugar in the mother causing the fetus to produce extra insulin-secreting cells in the developing pancreas. This could lead to increased insulin resistance and subsequent obesity as the child matures into an adult. It is possible that the high levels of leptin in an obese mother could cause her fetus to become leptin resistant. Methylation studies described in the rat reference above, suggest that maternal obesity may produce long-term modifications in the regulatory regions of obesity-related genes in her offspring. These modifications would be epigenetic, not mutational modifications. In other words, the actual DNA coding sequence is not changed, but while the fetus is in the womb, the 3-dimensional conformation of its DNA is modified, causing obesity-related genes to be more or less easily expressed even after the baby is born.

There is also evidence that the cycle of increasing transgenerational obesity can be broken. In 2006 an article in Pediatrics described a group of 113 obese mothers who had undergone biliopanceatic diversion (BPD) surgery for weight loss. This group of mothers had 45 childen before the surgery and 172 after the surgery. All were followed for 2-18 years. Comparing the 172 children born after BPD surgery with the 45 born before it, the prevalence of obesity decreased by 52% and severe obesity decreased by 45%. The effect was gender-specific, with the prevalence of overweight in the daughters decreasing from 56% to 42% and in the sons decreasing from 50% to 25%.

Apparently obesity does not have consequences just for the obese mother, but its effects extend into the lives of her children as well.
Posted by Stargazey at 10:29 PM