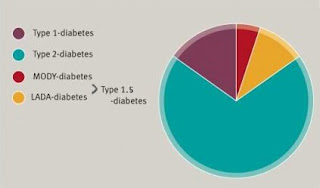 It matters because type 1.5 diabetics are often misdiagnosed as type 2 diabetics. It matters because type 1.5 diabetics will initially respond to dietary modifications and oral medication, but because their condition stems from the death of beta cells rather than insulin resistance, eventually they will not. Physicians who are not familiar with type 1.5 diabetes may not understand why a misdiagnosed type 1.5 diabetic has stopped responding to standard treatments and may assume that the patient is no longer complying with their instructions. (This happens often enough that physicians have good reason to suspect noncompliance as an explanation for poor diabetic control.) If the patient knows that he or she is following the doctor's guidelines, it might be a good idea to ask for autoantibody tests to see if destruction of the pancreatic beta cells is taking place. As in every other aspect of health care, it becomes important for the patient to become an active participant in the monitoring and management of his condition.
Posted by Stargazey at 8:49 PM