Is Diabetes Caused by Refined Carbohydrates? 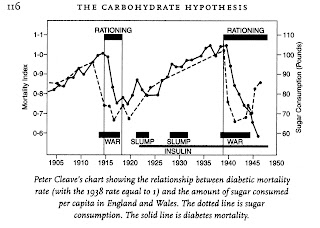 Last week we criticized Good Calories Bad Calories. This week we shall praise it. In chapter 6 of GCBC, Gary Taubes discusses Captain Thomas Latimore Cleave, a physician who believed that the common chronic diseases of Western civilization could be linked to the consumption of refined carbohydrates. Cleave had observed that non-Western societies tended to remain healthy even if they ate relatively large amounts of low glycemic index carbohydrates such as brown rice, wholemeal flour, non-starchy vegetables and nuts. But when a cultural group switched from traditional foods to white rice, white flour and sugar, the chronic diseases of civilization would begin to appear. To illustrate this, Cleave prepared the chart at the top of this post, which has been scanned from page 116 of GCBC. The dashed line shows per capita sugar consumption in England and Wales from just before 1905 to just after 1945. Sugar consumption increased during prosperous times and decreased during periods of wartime rationing. If diabetes had no relation to sugar intake, one would expect that deaths from diabetes (diabetic mortality) would gradually decrease as (1) injectable insulin was introduced and (2) medical treatments in general improved. Instead, until 1945 the index of diabetic mortality increased and declined in parallel with the consumption of sugar. Correlation is not causation, but the close relationship between sugar consumption and deaths from diabetes bears serious consideration.

Since 1945, the use of antibiotics to treat infection, the widespread use of home blood glucose monitors and the advent of new drugs to treat diabetes has dramatically reduced the death rate from diabetes. Nevertheless, there seems to be a steadily-increasing incidence of diabetes, particularly of type 2 diabetes. A recent article in Science Daily describes a study showing that type 2 diabetes has reached epidemic proportions in China. The scientists estimated that 9.7% of adult Chinese have diabetes and 15.5% have prediabetes. The prevalence of both conditions is higher in urban areas. Possible causes may include longer lifespans, increased smoking, decreased physical activity, increased air pollution, increased food consumption and decreased food quality.

Along the lines of Dr. Cleave's hypothesis about the relationship of refined carbohydrates and diabetes, in 2007 the Archives of Internal Medicine published an article suggesting one possible cause for the increase of diabetes in China. Its title was "Prospective Study of Dietary Carbohydrates, Glycemic Index, Glycemic Load, and Incidence of Type 2 Diabetes Mellitus in Middle-aged Chinese Women".

The study spent 4.6 years observing a cohort of about 64000 Chinese women with no history of diabetes or other chronic disease at baseline. These women were between 40 and 70 years old and lived in seven communities in urban Shanghai. They were divided into sets of quintiles according to several measures of carbohydrate intake. Adjustments were made for possible confounding factors including age, education, income, occupation, smoking status, alcohol consumption, total daily energy intake, physical activity, body mass index, waist-to-hip ratio and presence or absence of hypertension.

When confounding factors were eliminated, it was found that in middle-aged Chinese women, the percentage of carbohydrate in the diet was positively associated with the risk of developing type 2 diabetes. When glycemic index was considered, the higher the glycemic index of the food eaten, the more likely the women were to develop type 2 diabetes. In Shanghai, rice is a main staple food, contributing 73.9% of dietary glucose load (calculated by multiplying the total carbohydrate of a food by the glycemic index of the food and summing the values for all foods over a day). When women were stratified according to the amount of rice they ate, the group eating the most rice (over three cups of cooked rice per day) had a relative risk of 1.78 of developing diabetes as compared with those eating the least rice (less than two cups of rice per day).

For this group of Chinese women living in an urban area, carbohydrate intake averaged between about 260 and 340 grams per day. The largest part of their diet consisted of rice, which has a glycemic index of 55 (glucose=100). In this population, when adjusted for other factors predisposing to diabetes, a diet high in carbohydrates with a high glycemic index was associated with a higher risk of type 2 diabetes. Does this mean that diabetes is caused by refined carbohydrates? No, but once again, the close association between a higher intake of refined carbohydrates and a higher incidence of type 2 diabetes is worth serious consideration.
Posted by Stargazey at 8:28 PM

For those who are interested, there is also an article in Nutrition & Metabolism that shows an association of carbohydrate and glycemic load with insulin reistance in women 42-81: Comparison of multiple and novel measures of dietary glycemic carbohydrate with insulin resistant status in older women. I didn't put this in the main post because it would have made it too long. Again, it is a correlational study and does not prove causation.

Thoughts on grain consumption eliciting an auto-immune response, resulting the the destruction of beta cells? And why some are predispositioned (e.g. fraternal twins dx at age 9 with Type I) and other seemingly unaffected? Big, open ended topic, I know.

Thanks, Mike! I briefly addressed lectins and autoimmunity here. As for a specific autoimmune reaction against beta cells, I couldn't say.

The causes of diabetes are probably multifactorial--genetic, epigenetic and environmental, but beyond that I can't do much but speculate. If you have some references, I'd be glad to discuss them.

Not sure I would say rice is bad on the basis of this one study. It has been consumed for hundreds of years in Asia without major problems.

Hi, Matt! You're right--one study would not be enough to establish that rice is bad for you. For an individual, it would be advisable to eat a serving of rice and then monitor the blood glucose response to it over the next two to three hours. A persistently high blood glucose, or a high peak followed by brief hypoglycemia would be an indication that rice was not a particularly good food choice for that person.

As I understand it, the Chinese and Japanese ate brown rice until the 20th century. They have eaten white rice only recently. (Brown rice retains the bran and, compared with white rice, contains more fiber, folic acid, riboflavin, vitamin E and minerals.) It is easy to eat larger quantities of white rice than brown rice. Even though the glycemic index of the two rices is theoretically the same, the glycemic load from brown rice would be less because of the difficulty of eating large quantities of it. It is also possible that blood glucose rises higher and faster with white rice than with brown rice because it contains less fiber.

It may be that the switch from brown to white rice had no health consquences when vitamins and minerals were added back to the white rice. But in view of the rapidly increasing incidence of diabetes in China and Japan, it should at least be considered.