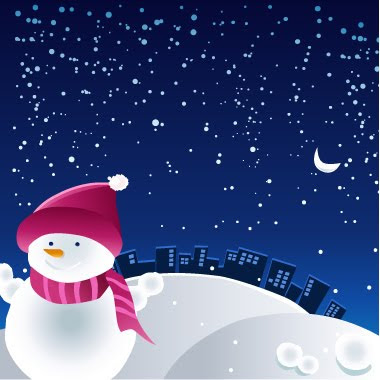 Winter is on its way. Leaves are changing color; daylight is diminishing. Another sign of impending winter is the temperature change, with coats and sweaters coming out of storage to accommodate the colder weather. But have you noticed that some people need sweaters in chilly weather while others don't?

Besides adding layers of clothing, people respond to cold by decreasing internal body temperature (hypothermia), by decreasing peripheral body temperature (insulation) and by increasing energy expenditure (adaptive thermogenesis). Thanks to modern conveniences, exposure to extreme cold is uncommon. However, people still have many opportunities to experience mild cold exposure, as can happen when they move from a heated house to a cooler situation outdoors, or from a hot outdoor environment into an over-air-conditioned building. In the context of weight loss, it is interesting to note that these temperature transitions may be made more easily by those who are lean than by those who are overweight.

Heat Production Higher in Lean Subjects
A 2006 article by Claessens-van Ooijen et al. compared the effect of mild cooling and rewarming on healthy men who were lean (average BMI=21) and overweight (average BMI=29). The men wore standardized clothing and spent an hour sitting in 59°F air while covered by a duvet. Under baseline conditions there was no significant difference in energy expenditure between the two groups. In order to produce cooling, the duvets were removed for an hour. During this time both groups showed an increase in heat production, but the increase in the lean group was significantly greater. (Possible shivering was monitored and did not occur.) When the duvets were replaced, after an hour heat production returned to baseline in the overweight group but remained significantly higher than baseline in the lean group. In other words, the overweight men showed less adaptive thermogenesis in response to a mild exposure to cold.

Thermogenesis by Mitochondrial Uncoupling
One mechanism for adaptive thermogenesis was proposed by Wijers et al. in 2008. Eleven lean male subjects spent 34 hours in a respiration chamber at a baseline of 72°F and subsequently spent 82 hours in the respiration chamber without shivering under mild cold conditions of 61°F. Although the activity of the subjects decreased about 20% under mild cold conditions, their total daily energy expenditure increased by 2.8%. Muscle biopsies were taken at the end of the baseline and mild cold conditions. Analysis of the tissue showed that the cold-induced increase in total daily energy expenditure of each subject was significantly related to the amount of mitochondrial uncoupling that had occurred in his skeletal muscle. It is possible that during cold conditions, adaptive thermogenesis occurs when muscle mitochondria bypass some of their ATP synthesis in favor of dissipating energy as heat.

Brown Fat Activity Higher in Lean Subjects
Another possible mechanism for adaptive thermogenesis is the action of brown fat, also called brown adipose tissue. Unlike white adipose tissue, brown adipose tissue has small lipid droplets and many more iron-containing mitochondria, which makes it brown. Normally it functions to provide body heat to newborn humans and to hibernating animals. However, it is still present to some extent in adult humans.

In a 2009 article in the New England Journal of Medicine, van Marken Lichtenbelt et al. studied 24 healthy men, 10 lean (average BMI=22) and 14 overweight (average BMI=30). They rested in a supine position for one hour at 72°F and then for two hours at 61°F. The activity of their brown adipose tissue was assessed by PET-CT scanning that measured the uptake of a glucose isotope, 18F-fluorodeoxygluxose (18F-FDG). Example scans are shown below. 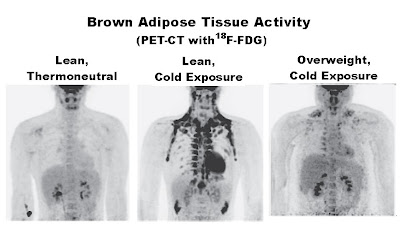 Under the thermoneutral condition of 72°F, very little of the 18F-FDG was taken up by brown fat, as shown by the lean subject on the far left. However, when the temperature was decreased to 61°, brown fat activity was significantly increased in the lean subject (center picture). It was also increased in the overweight subject seen on the right, but not as much. For the entire group, the activity of the brown adipose tissue was greater in the lean subjects than it was in the overweight ones. There was a a positive correlation between brown adipose activity and resting metabolic activity and a positive correlation with brown adipose activity and the core temperature under thermoneutral conditions. Overall, the study found that inreased BMI, but not increased age, was significantly associated with a decrease in brown adipose tissue activity.

Posted by Stargazey at 1:52 PM

Hi. How's this for an explanation...

Cheers, Nige (a fatter person who doesn't feel the cold but who overheats in hot weather).

Sorry it has taken me so long to get back to you Nige. What you say does make sense, but I couldn't see that it was addressed in any of the articles I've referenced.

In the context of these papers, "insulation" is a technical term that addresses a change in temperature distribution from one part of the body to another. Fat people seem to do more of this than thin people.

However, it is surprising to me that the investigators do not talk about insulation in terms of an R-value as you would in physics to measure the ratio of the temperature difference across an insulator to the heat flow per unit area. Even though there is blood circulating through the fat, it seems that there should be some way to measure how much insulation the fat provides under standard conditions.

1) Theyre not true BAT (as a loss of BAT activity is expected to be associated with infiltration of WAT and eventual loss of BAT) or 2) there isn't a difference (or very little difference) between the lean/obese subjects in terms of amount of BAT, but actually only BAT activity. I'm inclined to actually agree with as simple a solution as Nige (maybe with some scientific jargon peppered in).