What Happens to the Fat We Eat? 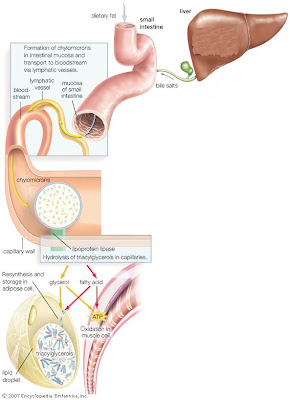 (The illustration is a simplification of a figure in the 2007 Encyclopedia Brittanica. If it seems too fuzzy to decipher, click on it to see a clearer version.)

For the low-carber, fat is an important macronutrient. What happens when we eat fat?
One of the important aspects of fat is that it is not water-soluble. In order to begin the digestion process, the liver makes bile, which in collected in the gallbladder and is secreted into the small intestine. The bile acts as a detergent. The bile salts in it have a lipophilic side, which binds to the fat droplets, and a hydrophilic side, which suspends the droplets in the watery mixture of the food we have just eaten.

The triglycerides or fats in the suspended droplets cannot be absorbed by the intestine. To accomplish absorption. the pancreas secretes an enzyme called pancreatic lipase into the small intestine, Pancreatic lipase breaks down each triglyceride molecule into two free fatty acids plus a monoglyceride. "Mono" means one, and in this case it means that one of the fatty acids remains attached to the original glycerol backbone. When the triglyceride is broken down into subunits, it is able to pass into the absorptive cells of the intestinal mucosa. After the three subunits have transited the wall of the intestine, the fatty acids are added back to the glycerol backbone and they form a triglyceride once more.

Inside the cells of the intestine, triglycerides are packaged into chylomicrons. Chylomicrons are large diameter (75-1200 nanometer) particles that contain a bit of protein, a bit of cholesterol and lots of triglycerides. The chylomicrons are not secreted directly into the blood but into the lymphatic system. They eventually arrive at the thoracic duct and then are deposited into the blood at the left subclavian vein. Once they enter the blood, they are transported into capillaries and are able to reach the entire body.

One of the proteins in a chylomicron is called apo C-II. This protein has the ability to activate an enzyme called lipoprotein lipase or LPL. Lipoprotein lipase resides on the capillary walls of tissues that have a high requirement for triglycerides, such as cardiac muscle cells, skeletal muscle cells and fat (adipose) cells. The activated lipoprotein lipase acts on the triglyceride molecules (called triacylglycerols in the illustration above) stored inside the chylomicron. It hydrolyzes or breaks down the triglycerides into two fatty acids plus a monoglyceride. Just as we saw in the intestine, intact triglycerides cannot pass through the cell walls, but when they are hydrolyzed into subunits, they can be absorbed into the cells. Once inside, they can be used for energy in the muscle cells or reassembled into triglycerides and stored in the adipose cells.

When we eat a piece of bacon, we start with fat and end with fat (or for the low-carber--energy from the fat). But, as you can see, there are may steps involved in getting from the beginning of the process to the end.
Posted by Stargazey at 9:13 PM

Thank you I was looking for that answer!