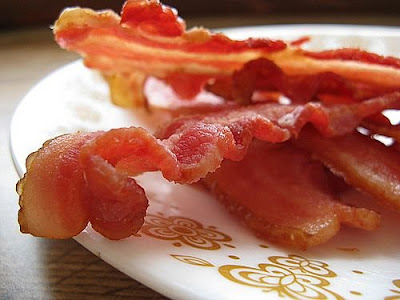 Low-carbers spend lots of their time thinking about fat, both in terms of the excess girth on their bellies and hips, and as an important macronutrient. Although fat is a perfectly natural substance, it may surprise you to know that fat is a chemical. 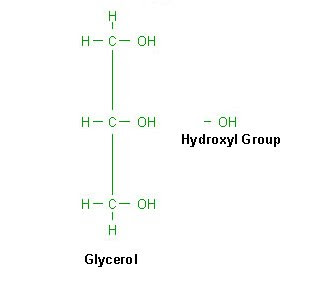 In chemical terms, fats are referred to as triglycerides. They are composed of two types of subunits. The first subunit, glycerol, is shown above. Although the glycerol portion is not the most important subunit of a fat, it is the root of its chemical name, triGLYCERide. Glycerol has a three-carbon backbone, depicted by the vertical line of C's in the figure above. The active groups in glycerol are the -OH or hydroxyl groups. 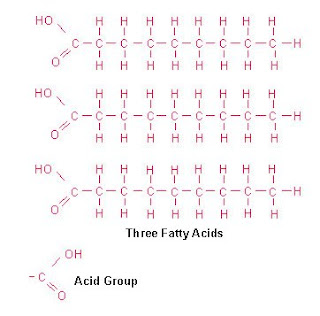 The other subunits are called fatty acids. There are three of them in each fat molecule; hence the prefix TRIglyceride. In the example above, each fatty acid contains a chain of carbons represented by a horizontal row of nine C's. In real life, the length of the chains can be from four C's to twenty eight C's. The chains do not have to be the same length within the triglyceride--any assortment is possible. The active group in the fatty acids is known as a carboxylic acid and is also shown above. 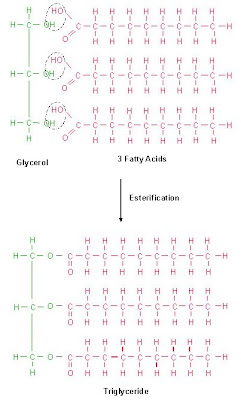 The active groups of the three fatty acids are joined to the active groups of the glycerol backbone though a process called esterification. For those who are interested in the enzymatic reactions involved, they are described here. At any rate, three fatty acids attached to one glycerol backbone produces a TRI-GLYCER-ide, a triglyceride, which is one molecule of fat.

That's probably enough biochemistry for this time. There will be more fascinating facts about fats in later posts. :-)

Posted by Stargazey at 8:35 PM