For many of those who have just started low-carbing, one of the best aspects of the diet is a new-found freedom from the constant need to eat. A low-carber can consume a reasonable portion of food, feel full, and not have to eat again until his or her next scheduled meal.

At least, that's true for many low-carbers. However, some low-carbers find that they still overeat, or that they continue to crave carbohydrates. What then?

One of the more interesting solutions to the overeating problem has been described by diabetes expert Dr. Richard K. Bernstein. He has observed that in some patients, Byetta (generic name, exenatide) is able to curb overeating and carbohydrate cravings. Byetta is an injectable drug that works very much like the natural gut hormone glucagon-like peptide-1 or GLP-1. 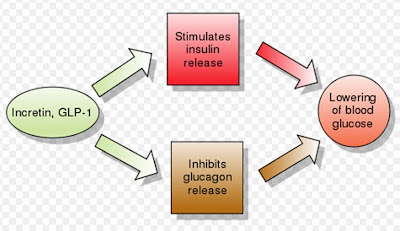 GLP-1 is one of the incretin hormones. Whenever food is eaten, GLP-1 is secreted by the L cells in the intestinal mucosa. GLP-1 has several actions:

When GLP-1 is given in an intravenous infusion to patients with type 2 diabetes, it is able to reduce blood glucose even in severe diabetes. Unfortunately, because GLP-1 has a half-life of about two minutes, it cannot be taken in the form of single injections. The drug Byetta is called an incretin mimetic because it is able to activate the same receptors used by GLP-1. Byetta's advantage is that, because it has a slightly different structure than GLP-1, Byetta has a half-life of about 2.4 hours.

In the treatment of diabetes, Byetta is typically given by injection twice a day, an hour before a meal is eaten. However, because of the 2.4 hour half-life, this means that Byetta cannot provide complete 24-hour control of blood glucose. For that reason, Byetta needs to be taken in combination with other oral hypoglycemic agents such as metformin and the thiazolidinediones. It is able to perform functions #1 and #2 of GLP-1, but it does not do them very well.

However, in its use for functions #3 and #4 (delay of stomach emptying and promotion of satiety), Byetta is much more promising. During a three-year open-label study of Byetta, an unexpected result was noticed. Investigators found that participants lost an average of 12 pounds over the three years, with one in four of these losing an average of almost 29 pounds.

Because of these observations, Dr. Bernstein began using Byetta to help treat overeating in patients who were in the early stages of diabetes. In Dr. Bernstein's Diabetes Solution, he says that he advises his patients to inject 5-10 micrograms of Byetta about one hour before the times when snacking or overeating typically occur. The maximum daily dosage of Byetta is 20 micrograms per day, permitting as many as four injections daily.

Patient reports indicate that Byetta reduces appetite and/or carb cravings for many people but not for all of them. There is no way to predict beforehand who will or will not respond, but it takes only about a month to determine whether a particular person is in the group that can benefit from the weight-loss aspects of the drug. If it does work, it gives the patient the opportunity to train himself or herself in the habit of eating healthy low-carb foods in moderate portions. In that way Byetta is somewhat similar to weight-loss surgery. It is able to give the patient a period of time to adapt to eating less food and making better food choices, but the use of Byetta also allows the patient to avoid the dangers of anesthesia, surgical wound healing and impaired absorption of vital nutrients.
Posted by Stargazey at 8:39 PM

I am on SymlinPen 120, the med for people on insulin and it destroys my appetite! I am very pleased.

Hi, Cosmo's Human! (Just so you know, I am Sassy's human, but I have never revealed that before.)

Thanks for the testimonial. I was going to ask people if they had any experience with Symlin or Byetta, but decided to let the comments take their course. I appreciate your input.

As usual, a great post. It is amazing the twists and turns the human body takes in its attempt to protect us from starvation. Now we must learn to protect ourselves from the unintended consequences of that protective devise, that is overweight, obesity, dibetes, heart disease, NAFLD, etc.

As one of Scarlet's humans I respect both Cosmo's human and Sassy's. Cosmo's human, is your owner cat, dog, other?

Cosmo is a Jack Russell Terror, oh I mean Terrier. His picture is on the top of my blog, but that is not me holding him. He will be 2 years old in Jan 2010.

Getting back to my weight loss, I broke the plateau when I added Nectar protein powder. It is not easy, as I dream in "food". Just kidding, though.

I didn't get fat overnight and I know it will take several more months of "Learning how to suffer". I just don't want to have complication from diabetes or have an early death.

Only if I can find food that will fill me up without increasing my carb intake.

Cosmo is a cutie! Sassy is a Siberian Husky who thinks she's a cat. And a dog was never more aptly named. :-)

I over ate a bit this past weekend. Holidays are hard. I am back on program as of this writing.

Good for you for getting back on track, Cosmo's human! Eventually the stumbles will get farther apart. It's a learning curve. :-)

Isn't there any way to solve health problems by fixing the cause of the problem? Why does everything require expensive pills, injections and mechanical devices?