I've Lost the Weight. Now, How Do I Keep It Off?

When I recently completed my annual set of questionnaires from the National Weight Control Registry (NWCR), it dawned on me that many of my readers may not be aware of the NWCR. It's time to rectify that.

The National Weight Control Registry is a long-term longitudinal study of individuals 18 and older who have lost at least thirty pounds and have maintained that loss for a year or more. (If you meet those criteria and would like to enroll in the NWCR, you may do so here.) The database was started in 1994 and now contains the records of over 5000 individuals. Registry members have lost an average of 66 pounds (range: 30 to 300 pounds) and have kept at least 30 pounds off for an average duration of 5.5 years (range: 1 to 66 years). Eighty percent of registrants are women and twenty percent are men.

The NWCR does not offer diet advice and it does not perform randomized clinical trials. What it does do is collect a large amount of anecdotal information from a group of people who have been successful at long-term weight loss maintenance. The investigators request data annually from hundreds of volunteers using several long questionnaires. They then systematize and compare the data in various ways to suggest possible strategies that might be helpful to people who have lost weight and would like to maintain the loss.

Because the study group is self-selected and because they are not following any specified experimental protocol, the papers derived from this data cannot be used to support or disprove scientific hypotheses about maintenance of weight loss. However, while the public waits for large-scale randomized clinical trials of weight maintenance strategies, the observations made by the NWCR can give guidance to individuals who would like to maintain a significant weight loss. What works for one person may not work for another, but there is a chance that what has worked for many successful maintainers may also work for a particular aspiring maintainer.

That said, let's look at some of the observations made by the National Weight Control Registry. These have been published in articles in refereed journals that are listed here.

Of the NWCR members who have successfully maintained their weight loss,

Most NWCR members lose and maintain their weight loss using a low-calorie, low-fat approach to eating. However, there are a few low-carbers. In 2007, Phelan et al. published Three-Year Weight Change in Successful Weight Losers Who Lost Weight on a Low-Carbohydrate Diet in the journal Obesity. They compared 96 low-carbohydrate participants with 795 others, all of whom had enrolled in the NWCR between 1998 and 2001.

As one might expect, the low-carbers and the other Registry members (referred to here as the control group) approached maintenance in significantly different ways. By the end of Year 3, the low-carb group reported consuming more calories per day than the control group (1610 kcal vs. 1340 kcal), with a greater percentage of their food in the form of fat (59% vs. 33%). The low-carbers were less likely to endorse holding back food intake (15% vs. 62%) as a means of controlling weight, though they did specifically avoid eating carbohydrates (17% of calories vs. 47% of calories). Finally, the low-carbers indicated that they had expended significantly fewer calories in exercise per week than the control group did (1119 kcal vs. 2246 kcal).

The bottom line of the NWCR observations is shown in Figure 1 from the study, which is reproduced below. Note that weights are expressed in kilograms. 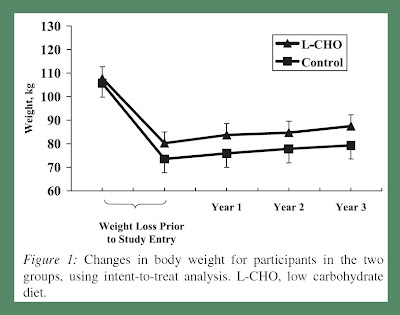 The low-carb participants lost slightly less than the other participants prior to study entry. Both groups regained some weight over the ensuing three years. (For those who are concerned about the intent-to-treat analysis, the authors report that the dropout rate was not significantly different between the two groups.) In the discussion, the authors conclude, "Comparing those individuals in the Registry who lost weight using a low-carbohydrate diet (n=96) vs. those who used other dietary strategies (n=795) we found no significant differences in magnitude of 3-year weight regain."

To reiterate, all of this data is anecdotal. It is compiled from a series of self reports, and as such is vulnerable to subjective errors. Nevertheless, a visit to the website of the National Weight Control Registry provides a great deal of interesting information, and suggests that successful long-term weight control may be possible on a low-carb diet.
Posted by Stargazey at 6:55 PM

I have often thought about registering, but I guess I have self-selected out.

I have lost about 50 pounds, but I don't have any words of wisdom, nor am I satisfied with my progress.

My dieting has been a little like yo-yo dieting, or perhaps more like a stair-step pattern ... down 20, back up 15, down 20, up 15, etc. And I keep changing diets, because they all quit working after a while.

I hear you, Jim. I have about four pounds that I keep losing and regaining. In a way it keeps me honest, though. If I quit trying, I expect I would gradually gain back the rest of my weight loss as well.

For me, low-carbing is the only thing that seems to work. I can't deal with my appetite on any other diet. It's interesting that you can switch among various diets.

Why does your weight fluctuate a bit? Is it normal or it is because our bodies' regulation of energy intake becomes less precise as we get older? It seems like a lot of middle-aged people either get larger gradually or alternate between weight gain and loss. I lived in Asia for many years and noticed that Koreans and Chinese got plump in middle-age, but many older Japanese remained slim. The only major dietary difference that comes to mind is that fish, a daily staple of the traditional Japanese diet, is consumed less often in Korea and Japan.

For me, daily weight fluctuations seem to have quite a bit to do with how much salty food I have eaten, whether I've eaten more carbs than normal, and the actual weight of the food. There can also be, um, bathroom issues that I won't go into here. :-)

As for longer-term fluctuations, it seems that constant vigilance is needed to keep weight from going up in an environment where food is always easily available. And as people get older, many get more insulin resistant. A carb level that had no effect in earlier years can lead to increased fat storage and resistance to fat loss. If the Koreans and Chinese eat more carbs and less fish than the Japanese do, that may explain their relative tendency to become chubbier as they age.