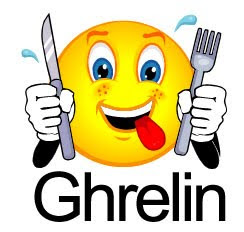 A hormone is a chemical that is produced in one part of the body, is released into the blood, and is able to regulate activities in other parts of the body. One example would be insulin, which is produced in the pancreas, but affects the function of tissues throughout the body, including muscles, brain and liver.

Insulin is important for food storage and satiety. Another hormone that plays a role in energy homeostasis is ghrelin, a 28-amino acid peptide discovered in 1999. Its name includes the Proto-Indo-European root word "ghre," meaning "to grow." Ghrelin is produced in the hypothalamus, kidney and pituitary gland, but most of it is synthesized in and released by the stomach. The picture below (credit to Rae Silver, Joseph LeSauter and Donald Pfaff) shows a photomicrograph of the stomach wall. The hormone ghrelin has been specifically tagged and can be seen in the form of black dots. 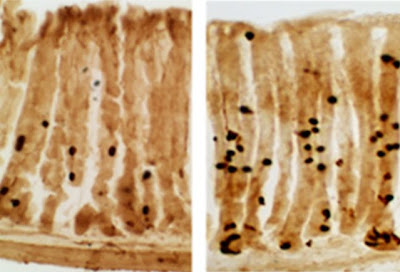 Ghrelin does have a specific role in the energy management of the body. Researchers at Columbia and Rockefeller Universities have shown that ghrelin is released in a circadian manner, prior to the onset of mealtimes. This pattern is illustrated in the graph below. 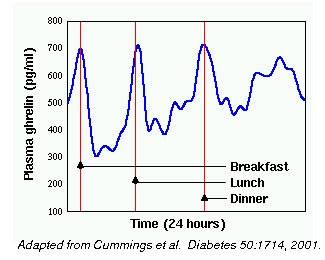 Just before mealtime, ghrelin is released from the stomach and acts on the hypothalamus to induce food-seeking behavior. In some ways this is a very adaptive mechanism. Rather than allowing a person to continue various activities and deplete energy stores, ghrelin acts to remind us to start seeking food and begin preparing for a meal. As soon as food reaches the stomach, ghrelin levels drop dramatically and stay low until an hour or so before the next meal is normally eaten.

Because of ghrelin's role in enhancing hunger, it is a prominent target of anti-obesity strategies. However, counteracting ghrelin has proved harder than one might expect. When a large part of the stomach is removed in weight loss surgery, ghrelin levels do drop in the short term. However, within a year post-surgery, ghrelin production recovers and patients tend to have higher blood levels of ghrelin than they did before the surgery. Even when mice are bio-engineered to lack the ability to produce any ghrelin whatsoever, their body weight gain and 24-hour food intake remain unaffected, suggesting that there are redundant appetite control systems that promote food intake in spite of the fact that ghrelin levels have been reduced to zero.

Although ghrelin-related strategies for hunger control do not look promising at this time, knowing about this hormone can still help us on a cognitive level. When the clock is moving toward lunch or dinner-time and we find ourselves obsessing about food, it's good to know that we aren't actually starving. We are simply getting a signal from our stomachs that it is time to start foraging for food. Because most of us live in a situation where food is as close as the nearest refrigerator or pantry, we can smile and tell ourselves that all is well. Thanks to modern civilization, we won't have to pick up a spear and run down an unsuspecting wild animal or rush out to gather roots and berries. The food will be there when it's needed, and we can calmly go back to our activities until it is time to eat.
Posted by Stargazey at 6:03 PM

Ghrelin production must be a learned behavior. I never eat breakfast so I only have two periods of hunger: 11AM and 5PM. I eat a very low carb diet so I suppose that has something to do with it as I am not getting any hunger urges from an insulin drop.

Ghrelin production as a learned behavior may be true (though I don't have any data on it either way). I remember Lex Rooker commenting in his journal that he would get hungry just before his single meal of the day. That struck me as odd at the time, but perhaps an anticipatory spike in ghrelin would explain it.

I don't get hungry on LC...
until I stray ever-so slightly close to my 30 gram "cut-off" for carbs.
Perhaps another key is learning to re-interpret what those signals mean...hunger, or thoughts of ANY type, actually!

You've confirmed my suspicion that ghrelin is a likely dead-end in terms of fighting obesity. Keep up the good - enjoying your blog!

I hear you anne h. Even when I know the hunger signal is for something else, I still have a hard time ignoring it. But if we keep working at it, progress will happen eventually. :-)

Thanks for the encouragement, Coach Jeff!