Alcohol and the Low-Carb Lifestyle

About six weeks ago, Woodswalker asked me to write a post addressing the role of alcohol in a low-carb diet. This is a huge topic, but I will present a few thoughts for consideration. If you have questions or comments, please remember that I am a biochemist, not a psychiatrist. 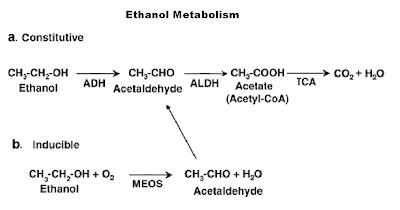 The first pathway happens mainly in the liver and is constitutive. ADH is the enzyme alcohol dehydrogenase. ALDH is the enzyme acetaldehyde dehydrogenase, and TCA stands for the tricarboxylic acid (Krebs) cycle. The second pathway is also found in the liver and is inducible--that is, it can be upregulated if the body is required to detoxify large amounts of alcohol on a consistent basis. MEOS stands for mitochondrial ethanol oxidizing system.

If a meal is consumed that contains alcohol, carbs, protein and fat, the calories from the alcohol will be processed first. This means that fat will not be used for energy until all the calories from the ingested alcohol have been burned. If a signficant number of calories of alcohol are ingested, this will postpone or even prevent fat burning. Drinking hard (i.e., distilled) liquor by itself does not affect insulin secretion, but when hard liquor is consumed with food, it increases insulin resistance and insulin secretion. Hard liquor also contains quite a few calories per ounce. By contrast, an ounce of mixed drinks, wine or beer will have fewer calories from ethanol. However, mixed drinks, wine and beer all contain carbohydrates, and, if they are consumed in quantity, will result in insulin secretion and eventual weight gain.

According to Dr. Michael Eades (see the comment at 31 October 2008, 21:34), a single glass of dry wine per day can improve insulin sensitivity and can assist with weight loss. For those who can stop at one glass of wine, that's great. But remember that alcohol is a psychoactive drug, and as such, it lowers inhibitions. In the low-carb context, it is important to note that alcohol can lower inhibitions against consuming carbs, and inhibitions against consuming a second glass of wine as well.

Alcohol stops gluconeogenesis. Gluconeogenesis is the process used by the liver to keep blood glucose levels within normal limits. If a person consumes lots of carbohydrates, an alcohol-induced cessation of gluconeogenesis will probably not even be noticed. However, if a person consumes alcohol while doing very low-carb, he is likely to experience a fall in blood sugar followed by a compensatory release of adrenaline. This can lead to heart palpitations which will be relieved by drinking orange juice or eating a high-glycemic food. Unfortunately, this regimen is not conducive to longterm success on a low-carb diet. If a low-carber notices that alcohol consumption is followed by the symptoms of low blood sugar, it may be necessary for him to drink less than a full serving to minimize the undesirable side effects.
Posted by Stargazey at 3:02 PM

Thanks for a very informative blog.

I've added your blog to www.lowcarbism.com. Email me if you want it removed and/or have any other blogs related to LowCarb/health that could be added.

Thanks, lowcarbism.com! I can't seem to find your blog, though. Could you provide a direct link?

Thanks again! It looks like a great site. For some reason it doesn't come up in Google, and when I type it into my browser bar, it crashes the browser. The mysteries of MicroSoft!

Thanks Stargazey, really interesting read and good to know! Michelle :)

I've just run across this blog following a search on "reactive hypoglycemia" and am now working my way thru all of your posts. This is a wonderful blog; thank you so much for all your work. (I'm a chemist so definitely appreciate the science.)

I'm commenting on this particular post because I have the very problem with alcohol that you describe. I'd actually worked out the explanation a while back but it's good to see the confirmation here and also some additional details.

Long before I started low carb I'd sometimes get what you called "heart palpitations" (in my case tachycardia) from having white wine before dinner. (This could sometimes happen with just an ounce or two.) For a long time I thought it might be some sort of allergy as it seemed to be different with different brands. This reaction was very unpleasant (sometimes kept me awake for hours) and since I didn't realize it was actually a hypoglycemia symptom, it never occurred to me to eat something.

My low-carb diet has exacerbated this reaction to such an extent that I've pretty much given up drinking which is probably best considering I still need to lose more weight.

One thing you didn't mention was a possible delayed effect which sometimes happened before I was on low-carb. My explanation (which may be incorrect) is that if I ate a lot of protein for dinner (Friday night is steak night) then once the gluconeogenesis was no longer suppressed, I'd get a glucose spike some hours after a meal (when I was asleep) followed by the natural insulin response which overshot and caused the reactive hypoglycemia and the associated tachycardia that woke me up.

Thanks again for all your hard work.

It's good to see a fellow chemist on my blog! Remember, insulin is released in response to protein, too, so it may be that your pancreas overshoots in response to a large protein load. However, I'm not a physiologist nor a physician, so that may not be the case and your explanation may be the correct one.

I hope you find the information here to be helpful in your low-carb journey. :-)

Thank you. I hadn't known that protein could stimulate insulin and a quick Google search just now may have led to the explanation of why my weight loss had almost stalled.

Since I didn't know that protein could stimulate insulin release I certainly had no idea that different proteins are different in this regard. It turns out that whey protein (which is what I use in my daily protein shakes) is the most effective :( In fact, it is so effective in causing insulin release that it may be helpful for Type II diabetics. But certainly not what I need. Yikes. (I also noted earlier your mention of stomach stretching possibly stimulating insulin as well. Another downside for a shake made with lots of water and ice.)

I'm planning to replace the whey with meat protein. I'll let you know what happens.

This is fascinating, Me! I've noticed that drinking a low-carb whey protein shake will sometimes make me hungry--kind of like eating carbs used to do. If the whey protein provokes an insulin response, that would provide a possible explanation.

In any case, please do report back on the experiment of replacing whey protein with meat protein. I've tried that lately and have noticed much longer-lasting satiety. (That's anecdotal evidence, not scientific truth, by the way!)