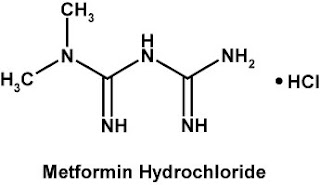 Metformin (brand name Glucophage) is a member of the class of antidiabetic drugs called biguanides. Unlike the sulfonylureas such as glipizide, metformin does not decrease blood glucose by increasing the plasma concentration of insulin. Instead it works in several other ways to accomplish its purpose. 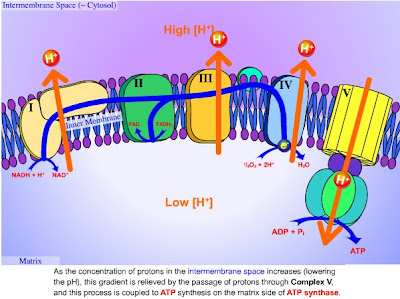 When metformin interferes with the conversion of ADP to ATP, the ratio of ATP to ADP decreases. When this ratio decreases, there is a resultant decrease in the activity of pyruvate carboxylase, which is the first enzyme used in the process of gluconeogenesis. The inhibition of pyruvate carboxylase significantly decreases the amount of gluconeogenesis the liver can perform. As we have seen previously, when the liver becomes insulin resistant, it will raise blood glucose by continuing to do gluconeogenesis even when blood sugar levels are normal. Although metformin does nothing directly to reverse insulin resistance in the liver, it is able to use the complex series of events beginning with the inhibition of ATP production in mitochondria to partially block the synthesis of excess glucose by the liver.

(As an aside, the inhibition of gluconeogenesis may cause an increase of lactic acid in the blood, lactic acid being one of the building blocks used for gluconeogenesis. In extreme cases this can lead to lactic acidosis, but the phenomenon is relatively rare with metformin.)

Although metformin has several other actions that reduce blood glucose, these two are the major ones. Unlike injected insulin, or oral drugs that increase insulin secretion, metformin does not cause an increase in insulin resistance, nor does it cause weight gain. However, it is important to note that metformin does not reverse insulin resistance. It simply acts to lower blood glucose in a non-insulin dependent manner.
Posted by Stargazey at 3:46 PM

Speaking of gluconeogenesis or GNG, do you have an opinion on whether or not excess protein gets converted to glucose? Doesn't GNG only take place under starvation conditions? Be that real starvation or an extremely low carb diet. I would be very interested in how they measure GNG.

I have checked references and I have returned!

Yes, excess protein does get converted to glucose (and thence to fat, if the glucose is not utilized for energy). This is not an extremely efficient biochemical pathway, but it does happen. See here in the second paragraph. Athletes also know this. This reference shows that they tailor their protein intake to match how much protein they actually utilize with various types of exercise. Even in athletes who are not fasting or low-carbing, excess protein gets converted to glucose and then to fat.

As far as the methodology used for measuring gluconeogenesis, here is more than you ever wanted to know about how to do it. Basically, a patient/subject is given a radiolabeled precursor (deuterated water or a C-13 form of glycerol), and the appearance of labeled glucose is measured in blood samples taken at subsequent time points. After many, many calculations, the amount of synthesized glucose as opposed to ingested, i.e., unlabeled, glucose can then be determined with a reasonable degree of accuracy.

Thanks for the info. Will need to spend some time reading through it. I wish Dr. Bernstein had given some background on this as he always says to diabetics (I am not diabetic) to lower their protein (but not below RDAs) in order to lose weight. One assumes this is the reason why. The only downside (and I am not sure how much of a downside it is) is one would think excess protein being converted to glucose leads to an overproduction of nitrogen. My understanding is that the downfall of rabbit starvation (too much lean protein) is the overproduction of protein.

I found an excellent reference on rabbit starvation here. The first section after the introduction explains that gluconeogenesis from amino acid precursors requires deamination, urea synthesis and glucose synthesis, and is an energy-requiring process.

In order to get this energy, the liver must use aerobic metabolism (conveniently illustrated in the body of this post). Aerobic metabolism requires oxygen, which the liver must get from the hepatic portal vein, where the oxygen content is low. The low oxygen tension in the portal vein limits gluconeogenesis and the energy available from glycogenic amino acids to a maximum of about 1600 calories per day. A few more calories can be obtained from the ketogenic amino acids, but again this requires aerobic metabolism, which also affected by the low partial pressure of oxygen in the hepatic portal vein. Thus, even though an individual is able to eat as much lean meat as he wants, only a limited number of the calories in that meat can be converted to a form that will support the body's metabolic processes.

In an obese individual, the remaining daily caloric requirement can come from body fat, but once those stores are used up, the inevitable outcome is death, even in an environment where an abundance of lean meat is available.

Great informative post as always! Thanks! Ron, aka The Former Donut Junkie.