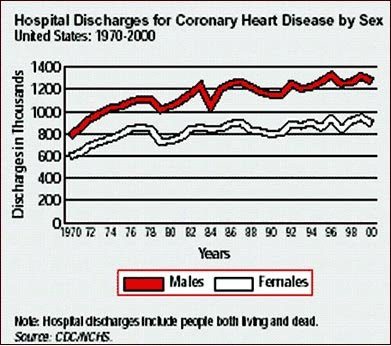 In spite of the increasing incidence of heart disease, the death rate from heart disease is decreasing. According to the figure below, from the New York Times, the one-year heart attack survival rate in Medicare patients went from about 58% in 1986 to just under 70% in 2000. The second graph suggests the reason for this: Medicaid hospital spending doubled during that time period. 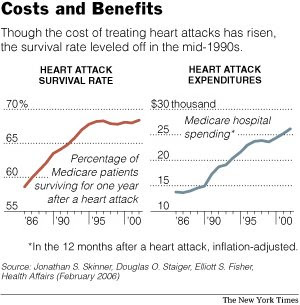 Patient survival is good. Increasing Medicare costs is bad. Some people have proposed limits on medical spending as a way to cope with the increased costs. One of these is Tom Daschle, who was recently nominated to be head of the Health and Human Services Department. Mr. Daschle's sudden withdrawal from that nomination was unexpected, and he had already provided much advice about acting quickly to ensure that health care legislation could be enacted without the debate and delay that had caused the 1994 health care overhaul to be abandoned.

In 2008 Mr. Daschle wrote a book called Critical: What We Can Do About the Health-Care Crisis. In it he advocated many of the provisions that have found their way into the 2009 economic stimulus package. These include moving medical record keeping to an electronic format that will be available to a new federal bureaucracy, the National Coordinator of Health Information Technology. This organization has a mandate to reduce costs and "help guide medical decisions at the time and place of care."

Mr. Daschle also recommended the creation of another bureaucracy to be modeled the after United Kingdom's National Institute for Clinical Excellence (NICE). This entity is found in the stimulus package as the Federal Coordinating Council for Comparative Effectiveness Research. It is described in the draft report for the bill as being expected to apply a cost-effectiveness standard to approve or reject treatments using a formula that divides the approximate cost for a treatment by the years the patient is expected to benefit from that treatment. The Council will enforce the standard by evaluating doctors and hospitals based on whether or not they are "meaningful users" of the new system. Translation: as Americans get older, they should expect to receive less medical care.

It is hard to contemplate health care reform built on the principle of denial of care to the elderly. However, Mr. Daschle has said that health care reform will not be pain free. He believes that Americans should be more like Europeans in their ability to accept hopeless diagnoses, to do without experimental treatments and to refrain from expecting too much from the health care system. It may be necessary in such a system to provide health care benefits for younger citizens and then ask citizens to be willing to sacrifice those benefits in their later years.

One hopes that all of this has very little to do with low-carbing. It is still permissible to buy eggs, cheese, meat and fresh vegetables. It is still permissible to avoid refined carbohydrates. As far as the health care system, following a low-carb lifestyle will prevent or lessen the impact of many medical conditions including diabetes, heart disease, gallstones, and dental cavities. And being able to achieve excellent health without resorting to medication and hospitalization is a good thing.

Posted by Stargazey at 2:34 PM