If I'm so fat, why am I always hungry? 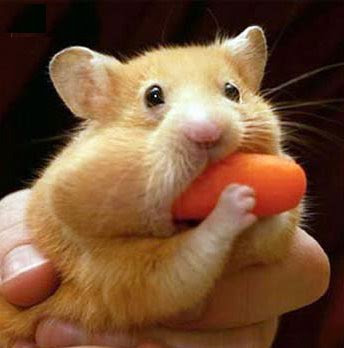 Body fat serves a number of purposes. It cushions our organs, it insulates us, and it provides a way to store energy. A normal amount of body fat is about 10-20% for men and 15-25% for women. So far, so good.

But sometimes we get too fat. What then? It seems logical to expect that our appetites would decrease, the extra fat would be burned as energy, and we would return to a normal fat percentage once again. But as millions of overweight people can testify, that is not how it always works. They can eat a meal, leave the table feeling full, and two hours later they will be ravenously hungry. They look down at their rolls of excess body fat and wonder, "Why in the world am I hungry? Why can't I just use some of this fat instead of having to eat again?"

In most cases, the answer is one word. Insulin.

Insulin is a hormone which is secreted by the pancreas whenever we eat carbohydrates or protein. Insulin sends a message to the tissues of the body--store nutrients! It is not practical for us to eat continuously. So we eat discrete meals, use some of that energy immediately, and (in response to the signal from insulin) store the rest for use later. Several hours after a meal is consumed, our insulin levels will normally fall, and this will permit nutrients to come back out of storage until it is time for our next meal.

As people get older, the insulin response system may begin to break down. The pancreas has to secrete more and more insulin in order to store nutrients following a meal. The elevated insulin takes longer and longer to return to normal levels, until it stays somewhat elevated all the time. As insulin levels stay high, it becomes progressively harder for stored nutrients to be released between meals. In other words, energy (mostly in the form of fat) is being stored at mealtime, but the energy in the fat can no longer be released efficiently between meals. The result? If a person has excess fat stores but also has persistently high insulin levels, he will be less and less able to access the energy he has stored, but will be forced to eat frequently to provide his body with the energy it needs. Even though he is fat, because of elevated insulin, he will find that he is always (or almost always) hungry.

Obviously the next question is, if a fat person wants to overcome constant hunger, how does he address his elevated insulin? This post, Reversing Insulin Resistance, shows that simply eating a low-carbohydrate diet significantly reduced insulin levels in a small group of obese type 2 diabetic patients. For a more detailed answer, please see this post. It summarizes the three primary strategies for lowering insulin (eat low-carb, eat moderate protein and wait 5-6 hours between meals) and gives several more suggestions for bringing insulin levels (and hunger signals) back into a normal range.
Posted by Stargazey at 7:17 PM

It always raises a smile when people talk of 'calorie counting' or adivse to 'eat less and do more'.

This will lead to hunger and as I always point out, one of the Four Horsemen of the Apocalypse is famine/hunger which tells you all you need to know about chronic calorie restriction.

I am not a believer in a calorie is a calorie. Sims overfeeding studies bear this out. However, if one is at a stall for a LONG time I wonder if a bit of calorie restriction doesn't work for weight loss? Not lowering calories to the point of slowing ones metabolic rate but enough to start losing weight. If one starves oneself the body uses its fat stores for fuel, insulin in this case does not get in the way of getting to those fat stores. One assumes that insulin goes lower in order to get at those fat stores or maybe glucagon gets raised to counter any affect of insulin and the fat in the fat cells is released? I guess I am wondering bottom line about the mechanism of how the body releases fat stores in a starvation, semi-starvation scenario. This then brings up the whole issue of intermittent fasting and if that works for weight loss.

JD, let me think on this a bit. In starvation, insulin does go down, and stored fat is therefore accessible. The tissues that require glucose must be supplied with that glucose by gluconeogenesis. Here is a graph illustrating how the body moves from glycogenolysis to gluconeogenesis. In starvation, the starting material has to be the body's own protein, which accounts for the muscle wasting and the decrease in organ size during starvation.

During intentional starvation or semi-starvation, you run the long-term risk of permanently downregulating your basal metabolic rate. If your body has reason to expect food scarcity, it will lower your temperature and your activity level so that it can store extra fat to be ready for the next famine. For an interesting discussion of this, please read The Physiology of Weight Change.

As far as intermittent fasting, I haven't done any reading on it and can't comment intelligently. It seems that our ancestors probably had to do it occasionally, but if it were done too often, it might lead the body to adopt energy conservation mechanisms to maximize the potential for survival. But that's only logic. I don't have any specific science to support it.

What do you know about the research on the high insulin responses to certain foods like dairy? It is thought that milk is designed to stimulate a strong insulin response because it is food for a growing baby. Would consuming a lot of dairy drive up insulin levels, which in turn drives fat storage? I thought about this as I was looking at Jimmy Moore's menus, his weight, and his blood sugar patterns. I wonder if those obese low-carbers don't eat a lot of cheese.

Actually, I addressed the insulinogenic properties of dairy products in the answer to a comment on this post: The Swedes Are Eating More Butter.

Scroll down to the third comment and you should find it. There are links to a couple of papers as well.

Also, well spotted!--Jimmy Moore does eat a lot of dairy. That might help explain why his insulin response system seems to be overactive, i.e. why it brings his postprandial blood sugars down so quickly.