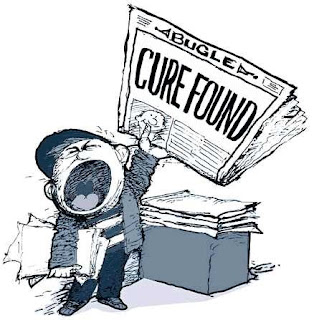 Unfortunately there is still no cure for type 2 diabetes. But a recent study published by Eric Westman's group at Duke University suggests that a diet with less than 20 grams of carbohydrate per day or a low-calorie/low-glycemic index diet could enable some type 2 diabetics to decrease their medication and lower their hemoglobin A1c levels.

Investigators randomized 84 obese type 2 diabetic subjects into a Low-Carb group or a Low-Calorie/Low-Glycemic Index (Low Calorie/Low-GI) group. (Full disclosure: the study was funded by the Robert C. Atkins Foundation.) For a period of 24 weeks the Low-Carb group was instructed to eat an Atkins induction-level diet (less than 20 grams of carbohydrate per day, without caloric restrictions). During the same time the Low Calorie/Low-GI group was instructed to eat a reduced-calorie diet that contained 55% low-glycemic index carbohydrates. In the Low-Calorie/Low-GI group, the target caloric intake was set for each individual to provide 500 calories less than that required for weight maintenance.

Fifty eight percent of the enrollees completed the study. Prior to the study the average food intake was 2128 calories a day, with 245 grams in the form of carbohydrates. During the study, the Low-Carb completers ate a daily average of 1550 calories with 49 grams (13%) of the total coming from carbohydrate. The Low-Calorie/Low-GI completers averaged 1335 calories per day with 149 grams (45%) coming from carbohydrate. While compliance with protocol design was not perfect, the Low-Carb group ate about 16% more calories and about two-thirds fewer carbs than the Low-Calorie/Low-GI group did.

Over the 24 weeks of the study, the Low-Carb group lost an average of 24.4 pounds and the Low-Calorie/Low-GI group lost an average of 15.2 pounds. At the same time, both groups saw significant improvements in fasting glucose, fasting insulin and hemoglobin A1c. It is commonly believed that for type 2 diabetics, weight loss causes a drop in hemoglobin A1c. Interestingly, in this group of subjects there was no correlation at all between the amount of weight loss and the level of hemoglobin A1c. (The corresponding figure can be found here.)

Of the 50 patients who were taking insulin at the start of the study, eight in the Low-Carb group and three in the Low-Calorie/Low-GI group were able to decrease or discontinue their insulin altogether. (Click here for a tabular summary.)

The authors go to some lengths to show that the Low-Carb diet was superior to the Low-Calorie/Low-GI diet in this study. In any case, it appears that type 2 diabetics who are able to adhere to either of these diets in the long term can see a significant improvement in their symptoms and a decrease in the need for injected insulin.
Posted by Stargazey at 9:22 PM