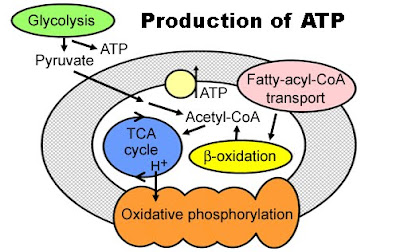 Cancer has numerous causes, including ionizing radiation, cigarette smoking, infection with the Epstein-Barr virus, and overexposure to the sun, among many others. When a cell becomes cancerous, it faces several challenges. One of these is energy production.

The molecule called ATP (adenosine triphosphate) is called the energy currency of the cell. Energy is stored in the phosphate bonds of ATP, and when these are broken in a controlled manner, the energy can be used to fuel metabolic reactions, to replicate DNA, and to permit cell division. Much of our cellular machinery is devoted to the production of ATP. As illustrated above, the high energy bonds of ATP can be created using reactions that involve the breakdown of glucose molecules. Even better substrates for ATP energy storage are the acyl groups of fatty acids. (Energy can also be stored in ATP from the breakdown of amino acids and several other types of molecules, but for simplicity's sake, those pathways have been omitted here.)

Once the raw materials (pyruvate from the glucose and acyl groups from the fatty acids) enter the mitochondria, they encounter a very complex network of enzymatic proteins that function to produce most of the ATP for the cell. To give an idea of what this involves, the picture below shows the complexes required in the mitochondrial membrane just to accomplish the oxidative phosphorylation part of the ATP production process.

Normally the cells of the of a mature organism are differentiated into particular types that are specifically associated with various tissues such as brain, skin, and bone. They are strictly regulated with respect to their division and growth, and they require oxygen for the production of the majority of their ATP. By contrast, more primitive cells such as embryonic cells, are able to multiply rapidly without constraint and are mostly anaerobic. While cancer typically begins in differentiated cells, as those cells start to divide in an unregulated fashion, they start to de-differentiate and begin to resemble more primitive cells. As the cancerous cell mass grows, it may begin to be cut off from the oxygen supplied by the blood. This in turn can cause it to adopt a less complicated way of producing ATP, anaerobic glycolysis, which is also called fermentation. 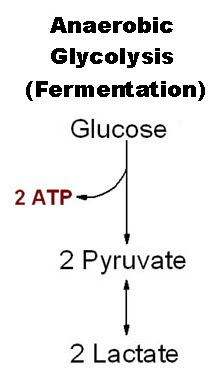 Anaerobic glycolysis provides much less ATP than could be obtained from aerobic glycolysis plus the TCA cycle plus oxidative phosphorylation, but it has the advantage that it does not require oxygen. All it requires is glucose. Fat cannot feed into the anaerobic pathway. Protein can, but it is a fairly complicated process. It is therefore logical to speculate that a very low-carb diet might slow the growth of cancers, particularly the ones that are highly de-differentiated and rely mostly on anaerobic glycolysis.

This idea is far from proven. However, there is some interesting information in a review article recently published in the Journal of Cancer Research and Therapeutics, Targeting energy metabolism in brain cancer through calorie restriction and the ketogenic diet. (To get to a free PDF version of the entire article, click on the link. When it opens, click on the little Adobe Acrobat icon that follows the words "To download PDF version of the selected article click here.") The authors present evidence that a ketogenic (i.e., low-carb) diet can be of value in slowing the growth of cancer, both in mice with implanted brain tumors and in two children with advanced stage brain tumors.

Do carbs cause cancer? No, probably not. But they might contribute to cancer growth, and it is conceivable that in the future, a ketogenic diet might be considered along with resection, chemotherapy and radiation as part of a treatment plan for cancer.
Posted by Stargazey at 7:32 PM

Great post. I have several friends who are either currently undergoing cancer treatment or are cancer survivors who have no idea the damage they are opening themselves to with the continued intake of carbohydrates. I have printed and intend hand to several and forward through e-mail to others. Your posts are always spot on, easy to read and understand.

Awesome post. I learned a thing or two, and I think I'll write about cancer again, well-armed. I just got started myself at http://lowcarbforhealth.com