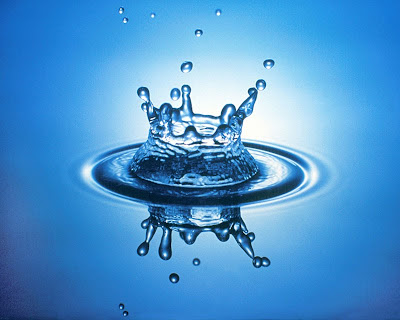 For low-carbers, the design of an eating plan often focuses on carb counts, calories, and essential vitamins and minerals. With the array of tasty and nutritious foods that are available to low-carbers, it's easy to overlook another important aspect of low-carbing--water intake.

Water keeps our tissues hydrated, provides an environment for enzymatic reactions to occur, and in the form of blood, water carries vital nutrients to cells that need them. Water also dissolves and removes the toxins from our bodies in the form of urine--1.5 quarts a day in the average adult.

One of the interesting aspects of Dr. Atkins' New Diet Revolution and Protein Power by the Drs. Eades is that both call for the daily intake of at least eight 8-ounce glasses of water per day. In Dr. Atkins' case, he says that only water counts as water for the purposes of the diet (page 230 of the paperback version of the book). The Eades say that any water-based fluid will work, as long as it doesn't contain calories (pp.103-105 of the paperback version of the book). Their counsel is, in fact, "Drink Till You Float." Whichever guideline you choose, if you decide to drink coffee or tea, remember that caffeine is a diuretic, and you will need to drink extra fluid to compensate for this. Both caffeine and artificial sweeteners can slow weight loss in some people, and if you are one of them you may wish to make other choices for your fluid intake.

One of the unique reasons for monitoring water intake during low-carb dieting is that most low-carb weight loss comes from the breakdown of body fat. Some of the body fat is burned to create ATP through the TCA cycle and oxidative phosphorylation, as was described in the previous post. However, some of the fat will be burned incompletely and will be converted to molecules called ketones. Ketones are also able to be used for the production of ATP, but if an individual is not totally keto-adapted, the body will allow some of them to be breathed out, or excreted in the urine and the stool. Drinking plenty of water makes it easier for the body to get rid of the excess ketones.

As the body adapts to a ketogenic diet, or as carb intake increases, fewer ketones will be produced. Even so, long-time low-carbers will continue to spill ketones if their fat intake is high and their carb intake is low, and they will benefit from an increased water intake.

Water has a few other properties that make it an important part of a low-carb diet. If plenty of water is ingested every day, less water will need to be reabsorbed from the colon, making it easier to have bowel movements. Some people have a propensity toward urinary tract infections. Drinking lots of water prevents urinary stasis and makes these infections much less likely. Similarly, although kidney stones have many causes and many treatments, in a person with a history of kidney stones, a universal preventive strategy includes drinking well over three quarts of water per day. Finally, low-carb dieters freqently begin to do more exercise as a result of having enough energy to resume physical activity, or in order to improve their overall health. Because less water is retained on a low-carb diet, those who engage in strenuous exercise programs need to be sure that they drink plenty of water so that they do not inadvertently become dehydrated.

Often, thirst alone is not a good indicator for drinking water. This is especially true as people age and their bodies are less able to sense dehydration. In order to keep water intake at an optimal level, it may be necessary to fill a container or a set of containers in the morning and consume the water throughout the day, so that by bedtime all that day's water has been consumed. It may take a while, but drinking lots of water will eventually become a habit. Be sure to drink extra water when you engage in vigorous exercise, on days that are hot and humid, during the winter heating season, when you are at high altitude, and when you are sick.

Water is an important part of a low-carb diet. And the best news of all? It doesn't contain a single carb!
Posted by Stargazey at 5:18 PM

I believe water is critical to success at low-carbing. It has proven especially important to me, as I practice Bikram Yoga, and have lost as much as six pounds of water in a single 90-minute session (though I average more like 3.5 pounds per session). Combine that with a high-protein diet's tendency to dehydrate you, and you can have a real problem.

I also had to jump up my salt intake by quite a bit. Too much water throughput with no additional salt is quite dangerous. At one point my sodium levels got so low I had a seizure. So much for mindlessly cutting salt (as my doctor recommended). Such a recommendation is only valid for someone who eats a lot of processed foods and is relatively sedentary.

I was interested in one of your posts that opened with:

'Low-carbers hear it over and over. "I can't get to goal." "Nobody I know has reached goal." "Almost all the low-carb gurus are obese." '

Actually, I'd never heard any of that before (although the pictures of some of the low-carb folks were real eye-openers).

Most of the folks I know who stuck with low-carbing for more than a few days had good success. In my case, at 210.5 pounds in Feb 2009, I dropped to 150 pounds by Sep 2009, surpassing my initial goal of 160 pounds. According to hydrostatic weighing, I lost 63 pounds of fat and gained 3-4 pounds of muscle; my body fat percentage went from 39% down to 12.7%. I have a number of friends, all about my age (55) who have all made and surpassed their goal weights on low-carb diets.

On the other hand, all of us tend to eat real food, not odd low-carb imitations of high-carb foods.

Thanks for your observations, David, especially the one about being sure to have enough salt intake along with the extra water.

As far as the number of low-carbers not reaching goal, probably you read at different low-carb sites than I do. My main hangout is Low Carb Friends, and there aren't a whole lot of participants in the Maintainers' forum there. I'm sure the reasons for failure to reach goal weight vary, but you're right--eating real food is an important aspect of successful low-carbing.

I had gout a long time ago, and it flared up when I started the diet, I'm sure because I wasn't drinking enough water. Google to the rescue, though: drinking lots of coffee fixed me right up. Thanks for the post!