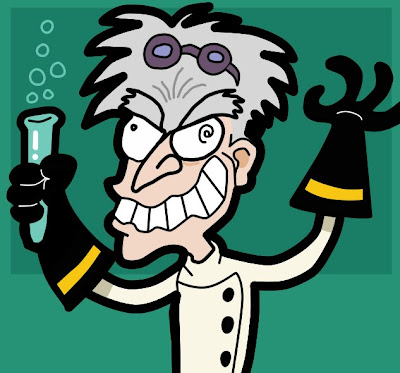 The premise of this blog is that the scientific method can be used to support or invalidate the tenets of the low-carb lifestyle. While science can never claim to establish the final truth of a particular hypothesis, it is the best instrument we have to approximate the truth of something that is falsifiable, that is, something that is capable of being tested by experiment or observation.

Although science is an excellent tool, we must be careful to remember that science is performed by human beings who are not perfect. Low-carbers are already aware of the problematic work of Dr. Ancel Keys. Among Dr. Keys' most important publications was the Seven Countries Study. This study helped establish the diet-heart hypothesis when it found that in seven specific countries, the cardiovascular disease rate was positively correlated with average serum cholesterol and per capita intake of saturated fatty acids. In 1957 two scientists, Jacob Yershalmy and Herman Hilleboe, noted that data were available from 22 countries, not just seven. They published a paper showing that when all 22 countries were analyzed, the cholesterol/saturated fat correlation to heart disease became much weaker, and the incidence of heart disease was more strongly related to sugar intake. Even though it seemed that Dr. Keys might have cherry picked his data, his diet-heart hypothesis has nonetheless prevailed over the years.

The science of Anthropogenic Global Warming (AGW) doesn't have much to do with low-carbing, but it does have a great deal to teach us about the practical aspects of whether to believe or disbelieve a particular scientific finding. In November 2009, a series of e-mails was made available on the internet, purporting to be from the Climate Research Unit (CRU) at the University of East Anglia in Norwich, England. As of this writing, their authenticity has not yet been denied, and these e-mails now form the heart of what has been termed Climategate.

What does Climategate have to tell us about how to evaluate scientific claims with a skeptical eye?

First, if the scientists refuse to release their raw data, it's not a good sign.

Phil Jones (head of the CRU) and Tom Wigley (University Corporation for Atmospheric Research in Boulder, Colorado) discuss here how to avoid releasing data in response to a Freedom of Information request. Dr. Jones is so averse to scrutiny of his data that he admits to clearing e-mails off his computer here and advises his colleagues to do the same here. (AR4, referenced in this link, is the Fourth Assessment Report of the UN's Intergovernmental Panel on Climate Change (IPCC), released in 2007. The AR4 allowed AGW supporters to claim a consensus in favor of anthropogenic global warming.)

Second, if the scientists select or massage their data to make it obey their hypothesis, it's a bad sign.

Dr. Jones has a problem because his data shows declining recent temperatures rather than rising ones. Here he tells three of his colleagues, "I've just completed Mike's Nature trick of adding in the real temps to each series for the last 20 years (ie from 1981 onwards) amd from 1961 for Keith's to hide the decline." Trick? Hide the decline? What might that mean?

"Mike" is Michael Mann, the creator of the Hockey Stick graph that used tree ring data to show no warming in the Medieval Warm Period, but a sudden, dramatic increase in global temperature in the late 20th century. In this article, Stephen McIntyre and Ross McKitrick show that the hockey stick graph is the result of overweighting data from American bristlecone pines and from using a non-centered principal component analysis that will almost always produce a hockey stick endpoint, even from random numbers.

"Keith" is Keith Briffa, whose tree ring data from the Yamal Peninsula of Siberia also showed a hockey stick pattern of recent global temperatures. Except that when Briffa's 12 tree cores (the red line on the graph below) are compared with 34 cores from the same area analyzed by Stephen McIntyre (the black line), the larger sample does not show the hockey stick pattern, suggesting that Briffa's 12 tree cores were unrepresentative of the local tree growth patterns and should not have been used to infer patterns of climate change for the Yamal region of Siberia, let alone for the whole planet. 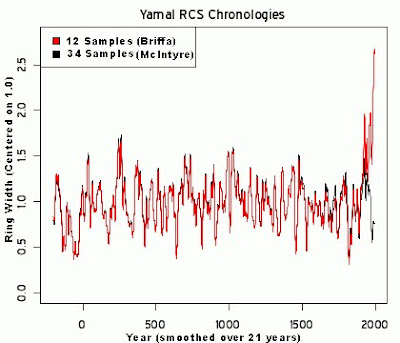 Finally, if the scientists collude to allow some points of view to pass the peer review process while preventing other points of view from being expressed, it's a very bad sign.

Scientific journal editors decide which submitted papers will get reviewed, who the reviewers are, and whether the papers eventually get published. Here Tom Wigley tells Timothy Carter that they must get rid of an editor of the journal Climate Research. The man subsequently resigned. Here Tom Wigley and Michael Mann discuss a troublesome editor at Geophysical Research Letters (GRL) and whether he could be ousted because his presence may bring other AGW skeptics on board. Several months later the editor has left his post and here Michael Mann says, "The GRL leak may have been plugged up now w/ new editorial leadership there." Here Phil Jones is also having trouble with a new editor of the journal Weather, published by the Royal Meteorological Society (RMS). Dr. Jones says he has complained about the editor to the RMS chief executive, but if that doesn't work, he will not send any more papers to the RMS and will resign from the organization. When a group of scientists consciously engages in encouraging some editors and intimidating others, it's not particularly surprising if their papers tend to get published in the peer-reviewed journals while those of the scientists with opposing views do not.


Presumably scientists who hide data, who change data to fit their preconceived ideas and who conspire to see that only their data is published may nevertheless have reached correct conclusions. That would be the "fake but accurate" defense. However, it is much more likely that scientists who behave in this way have something to hide. Whenever you learn that a scientist in any field has engaged in one or more of these questionable activities, be very careful of whatever that scientist has to say.
Posted by Stargazey at 8:39 PM

Very important post.
I wander sometimes whether there is an inherent fault in the decision making process when it comes to governments accepting scientific evidence. The food pyramid,cholesterol lowering, fluoridization, immunization,climate change and possibly more are all based on fairly shaky or at least not very solid science. Two that I have delved into (food pyramid,cholesterol) are in my opinion downright faulty.
It could be that there is a lack of periodic review of decisions by people who were not involved in the original decision. Possibly that's how mistakes get accumulated. Too much ego, unchecked.

Periodic review is a good idea, Miki. However it's important to realize that a scientific agenda may be self-perpetuating. As Gary Taubes describes in Chapter 23 of Good Calories Bad Calories, the original group will draw in younger collaborators who gain credibility by having their names on papers with the old guard. When the old guard dies off, the younger group takes their place and acquires new collaborators. Thus the dogma is perpetuated. Truth will eventually come out in science, but sometimes it takes quite a while.

Am reading GCBC now. It seems that there are enough scientist that think independently only no one wants to review old decisions. The food pyramid, as far as premise and promise vis a vis actual results is a major fiasco. You don't need to be a scientist to come to that conclusion. There should be an independent body that periodically review the results of such policies.