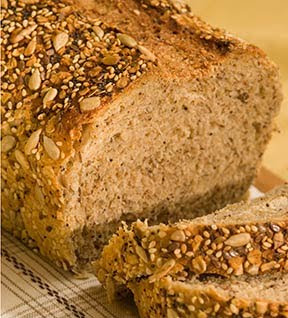 Today's question is: What if you know that the dietary-saturated-fat-and-cholesterol hypothesis doesn't work very well to explain heart disease, but at the same time you don't want to admit that eating too many refined carbohydrates might be the cause?

Answer: You put the blame on fiber. Or rather on not eating enough fiber.

In 1972, Peter Cleave tried to explain to a U.S. Senate Select Committee that when primitive cultures adopted Western eating patterns, they also began to experience the diseases of Western civilization, including diabetes, heart disease and hypertension. Cleave pointed out that the fat and cholesterol hypothesis of heart disease did not explain this transition, but that the adoption of a diet rich in refined carbohydrates did account for it rather elegantly. The Senators reached the only logical conclusion. They refused to believe Dr. Cleave. Dr. Ancel Keys had so completely won the argument that dietary fat was the cause of heart disease, that any alternative hypothesis had to be rejected out of hand.

The Senators were left with the problem of how to explain the increased incidence of heart disease in transitioning cultures. Enter a famous medical missionary, Denis Burkitt. While working in Uganda, Dr. Burkitt had noticed that Africans produced several times more feces than people in Western countries. He hypothesized that the presence of dietary fiber produced the absence of the diseases of Western civilization. Burkitt collected over 800 anectodal reports showing that primitive peoples ate high fiber foods, while Westernized cultures tended to eat foods that were nutritionally dense and low in bulk, not providing enough volume to allow the intestines to remain healthy. This idea made sense to the granola-eating counterculturalists of the time. More importantly, it did not contradict Ancel Keys' diet-heart hypothesis.

For the purposes of low-carbers, several of the studies on the relationship of glycemic load with the risk of type 2 diabetes may be instructive. The glycemic load is the glycemic index of each food eaten, multiplied by the number of carbohydrate grams of that food eaten, summed for all items consumed during a day. In two studies (here in women and here in men), Salmerón et al. showed that the combination of a high glycemic load and a low cereal fiber intake increased the risk of type 2 diabetes when compared with a low glycemic load and high cereal fiber intake. The figure below is taken from the women's study. 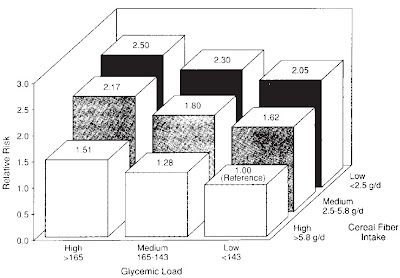 Let's say that two low-carbers eat an identical number of carbs. One eats high-glycemic foods and has a high glycemic load. The other eats low-glycemic foods and has a low glycemic load. Both of them will need to release insulin to dispose of the carbs, but the first low-carber will have to release insulin in spikes to counteract the rapid rise of his blood glucose, while the second low-carber will be able to get by with a more gradual release of insulin. As Sullivan et al. have shown here, there is reason to believe that insulin spikes contribute to the development of insulin resistance.

How does fiber fit into the equation? The traditional explanation is that fiber fills us up. However, experiments done with caloric dilution show that when low-calorie foods are subsituted for higher-calorie ones, humans are well able to adjust their consumption of food to maintain their customary caloric intake. Another function of fiber is that it slows the absorption of nutrients from food. In other words, the addition of fiber can be expected to lower the effective glycemic index of high-, medium- and low-glycemic index carbohydrates. The relationship of the total amount of fiber to the total number of carbs to the glycemic index is probably quite complex, which may explain why many of the fiber-health studies do not show clearcut relationships between fiber intake and outcomes such as heart disease, type 2 diabetes, obesity and cancer.

In other words, if low-carb is good and low-glycemic index carb is good, the addition of fiber to all of that might be better. Low-glycemic-index foods like broccoli and nuts do tend to contain more fiber, so perhaps the point is moot for low-carbers who are careful about the type of carbs they consume. In any case, there is good evidence that lowering carbohydrate intake and lowering the glycemic index of those carbs is protective against the diseases of Western civilization. The data on the benefits of fiber intake is not overwhelming, so use your own judgment to decide what level of fiber intake might be right for you.
Posted by Stargazey at 10:49 AM

Here's a thought based on what I learned from doing this post:

The fiber hypothesis and the carbohydrate hypothesis, taken together, might be combined into an insulin hypothesis that explains why primitive peoples tend to avoid the diseases of Western civilization. Groups like the Inuit, the Plains Indians and the Masai ate very few carbs and very little fiber. A very-low-carb diet does not produce insulin spikes, and fiber would not have been needed to smooth out the insulin response to the ingestion of protein.

But native cultures that ate a higher percentage of carbohydrates were not eating refined carbohydrates like sugar, rice and flour. Their carbs had a low glycemic index and would have resulted in a slower, smoother insulin release than that seen from refined carbohydrates. The presence of fiber would have smoothed out any insulin peaks even more. The absence of insulin spikes in pre-Western diets suggests that these people would have been much less likely to have developed insulin resistance and with it, the diseases of Western civilization. That's just speculation, however.

Hello Stargazey, your speculation may be right. According to Dr. Robert Lustig, fibre is very important. He recommends people to eat their carbs with fibre, ie, eat fruit, never drink the juice. Fructose, according to him, is poison and metabolised in the body the same way as ethanol. You may have known this, but you can watch his lecture: Sugar, the Bitter Truth here, or you can watch his interview here. It's interesting that he recommends that there should be 5, instead of 3 macronutrients, fat, protein, starch, sugar and ethanol. It's has provided me with a whole new understanding about carbs, and sugar in particular.

By the way, I've been following your blog, and feel that you may be interested in this.

Hi, Wati! I've heard Dr. Lustig's lecture, and the first hour is good. He talks about fructose, and he gives lots of biochemical evidence for what he says. I've written a couple of blog posts on fructose(here and here), and the more I learn about it, the more I try to avoid it.

But by the end of Dr. Lustig's lecture, he drifts away from evidence-based findings and starts presenting ideas without backing them up with studies: glucose is the energy of life; lots of fiber is good for you; exercise helps you lose weight. I especially have a problem with the idea that glucose is the energy of life. Most of our tissues run more efficiently on fatty acids and ketone bodies than they do on glucose. A few tissues do require glucose for energy, but you really can get all you need through gluconeogenesis. You don't have to eat any glucose whatsoever.

But thanks for the links. They provide some interesting "food" for thought.