Insulin Resistance and the Metabolic Syndrome 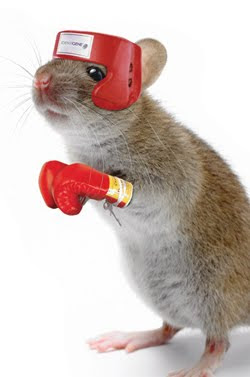 Interestingly, one of the arguments Taubes does not use for his hypothesis is something called the "knockout mouse." The knockout mouse is not a small pugilist with boxing gloves. Instead, it is a genetically engineered mouse in which one or more genes have been turned off (knocked out) through targeted deletions. If we want to know what the effect of insulin is on a particular tissue, one approach is to delete the expression of the insulin receptor in that tissue.

The first attempt at an insulin receptor knockout mouse was to remove insulin receptor expression from the entire mouse. These mice were smaller than normal but were born alive at term. Shortly after birth they developed diabetic ketoacidosis and died. This was not helpful to the investigation of the relationship of insulin receptor signaling to various metabolic conditions, and the investigators moved on.

Because muscle insulin resistance is thought to be important in the development of type 2 diabetes, the next group of knockout studies involved mice that lacked insulin receptors specifically on muscle tissue. These mice had normal levels of blood glucose and plasma insulin. However, they had a 74% decrease in insulin-stimulated glucose transport into their muscle tissue. This caused blood glucose to be preferentially taken up by adipose tissue. Although these mice did not develop overt symptoms of diabetes, they demonstrated two of the features of the metabolic syndrome: increased fat mass and high triglycerides.

Another tissue targeted for insulin receptor deletion was the liver. By two months of age, the mice lacking liver insulin receptors had high levels of serum insulin but were were hyperglycemic in the fed state. To a great extent this was found to be attributable to the fact that insulin was unable to suppress the production of glucose by the liver. This suggests that hepatic insulin resistance is necessary for the onset of overt diabetes.

Because insulin receptors are widely distributed in the brain, investigators also developed a neural insulin receptor knockout mouse. The brains of these mice were normally developed, but the mice showed increased food intake and moderate diet-dependent obesity. It is known that the brain is able to regulate hepatic glucose production. When these neural-knockout mice were given exogenous insulin, they were only about half as effective as normal mice at suppressing hepatic glucose output.

Finally, the insulin receptor was uniquely deleted in the pancreatic beta cells of another group of mice. The investigators were expecting the pancreas to sense glucose concentrations directly rather than to use insulin signaling as an intermediary. To their surprise, mice that lacked pancreatic beta cell insulin receptors showed both a decreased ability to sense glucose and an insufficient secretion of insulin in response to glucose. Some, but not all, of the mice developed diabetes.

For those who would like to read more about these experiments, additional information can be found here and here. The use of insulin receptor knockout mice is a rather blunt instrument to determine whether insulin resistance can be implicated as the cause of the development of the metabolic syndrome. And mice are not people. Nonetheless, it is interesting to note that the deletion of insulin signaling in various tissues can produce obesity, high triglycerides, poor suppression of glucose output by the liver and both impaired pancreatic production of insulin and insufficient release of insulin in response to glucose.
Posted by Stargazey at 10:12 AM

If you don't mind me rambling a bit: The mice lacking insulin receptors in the brain ate more, correct? So insulin conveys a feeling of satiety to the brain. Many people say that a high and lingering insulin response after eating causes hunger because it locks fatty acids in fat cells and lowers blood sugar making the body think that it is starving ("internal starvation"). There is a bit of a disconnect between these two statements - if insulin is elevated for an extended period of time, that should cause increased satiety, not hunger. I suspect that the cause of increased hunger is not high insulin per se, but what high insulin is a marker for, namely insulin resistance. The brain is not getting the message that insulin is trying to convey because the brain in resistant to the hormone. Is there merit to what I'm saying?

Thanks, LynMarie! That's a good question. There are so many factors that regulate satiety, that I don't know how insulin signalinig in the brain fits in with them. When insulin binds its receptor, there are a very large number of signaling pathways that can be stimulated, depending on the particular cell and the environment of the cell. In neural tissue there might be a unique insulin signaling pathway that results in satiety.

It may have something to do with the satiety hormone leptin. See here and here. Insulin causes the release of leptin from fat cells. It would be logical if insulin was also involved with upregulating the detection of leptin in the brain. If so, that would explain why the neural-knockout mice were somewhat overweight but not grossly obese, like people who lack leptin recptors are.

I think you're right--it's chronically high insulin that locks fatty acid in cells. The way I understand it, several hours after a meal, if insulin is still high, the body can't make the switch to using fatty acids for energy. The body has stored all the excess glucose and can't get at its fatty acid stores. It's convinced it is starving and ratchets hunger up to irresistible levels. It's possible that insulin resistance could be involved in that signaling process as well--people think they're starving sooner if their brains can't detect that insulin is still around. But that's just my take on it. I don't have any hard data to back it up.

Human (mis-) interpretation of cause and effect is what brought us to this point in the first place.

You said, “The mice lacking insulin receptors in the brain ate more, correct? So insulin conveys a feeling of satiety to the brain.”

This does not necessarily follow. As Stargazey pointed out in her reply, there are always many factors to be considered, and we can never be certain of a causal pathway. Evidence can only point us in a particular direction. This is what science does for us, as long as it is objectively (and humbly) perceived.

Excellent article, Stargazey, and thank you for answering LynMarie's question.

A request: I was wondering if you could do a write up on the cortisol-insulin connection in regards to nutrition? I know that's a big ticket item, but in my own self-study, I've found both hormones to be the furthest thing from "black and white", and various sources have contradicting information.

Thanks, Crossfit LAC and Mike!

Mike, I'll see what I can do to look at the cortisol-insulin connection to nutrition. If you want to talk about pleiotropic (many-action) hormones, you couldn't have picked two better ones. :-) Is there some specific nutritional aspect you have in mind? I could start with that and see where it leads.

No specific aspects; I bring up the question/topic because these two hormones seemed to be talked about the most in a gym/nutritional setting, insulin in regards to carbohydrate ingestion, and cortisol in regards to stress/over training.

Any information you present on either will be much appreciated. :)