For the next few weeks, I will be on an overseas vacation. In the meantime, I've been searching on Google and have come up with a set of graphs that should be interesting to look at and consider in the context of low-carbing. Most, but not all, of the data comes from the United States. These graphs are provided without any context to describe how the data was collected or how valid it might be. They just provide something to think about. If you want to enlarge any graph, just click on it, and it will open in a larger version.

One of the more interesting graphs shows that there is not much of a relationship between average cholesterol and rates of death from heart disease. Ancel Keys used seven carefully selected countries to "prove" the opposite, but the countries used for this graph tell another story. 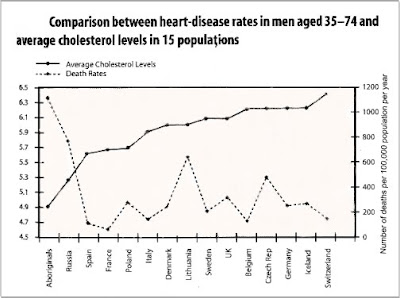 Here's a graph that should be completely unsurprising to a low-carber. It shows a steadily increasing consumption of sugar in the United Kingdom and the United States and, beginning about 1900, a dramatic increase in rates of obesity. 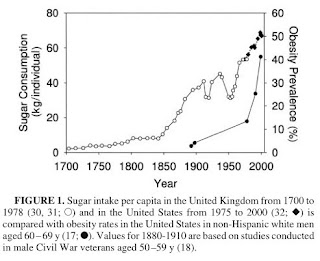 Starting in about 1970, people in the United States began substituting high fructose corn syrup (HFCS) for table sugar. Interestingly, there was also an increase in the incidence of diabetic end stage renal disease during that time. Correlation is not causation, but the values do increase in a similar manner. 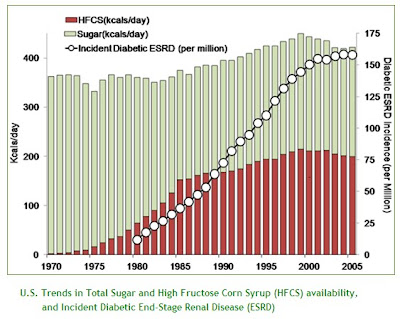 End stage renal disease is one of the complications of diabetes, which has also been increasing in the United States. 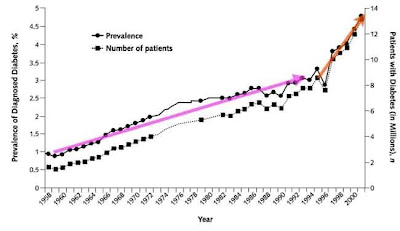 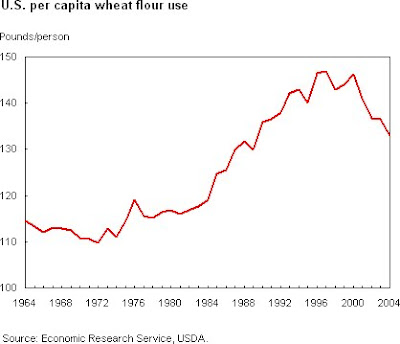 We are also eating more carbohydrates as a percentage of our total calories. 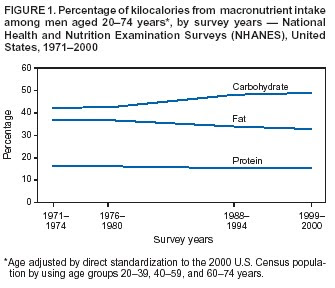 Not only are we eating a higher percentage of carbs, we are also eating more total calories per person every day. 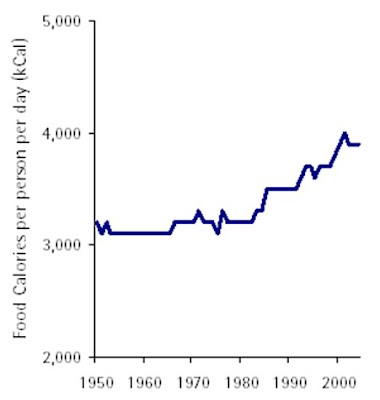 All of these observations are consistent with (but do not prove) the hypothesis that eating refined carbohydrates can result in the diseases of civilization. However, other factors may also contribute to the increase in metabolic diseases during the past century, and here are some more graphs to consider in that regard.

It is possible that insufficient fiber can be blamed for an increase in health problems. I couldn't find a graph that described fiber consumption over time, but did find one on vegetable consumption. It appears that we are eating more vegetables (and presumably more fiber) than we used to. 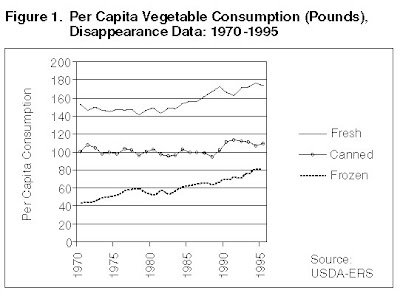 It's possible that products that are subject to "sin taxes" could contribute to health problems. Although the introduction of cigarette smoking could be associated with the arrival of Western civilization and its diseases, it is interesting to note that the per capita consumption of cigarettes has actually declined since 1977. 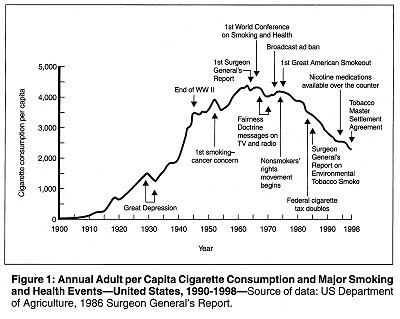 Total alcohol consumption has decreased, too. 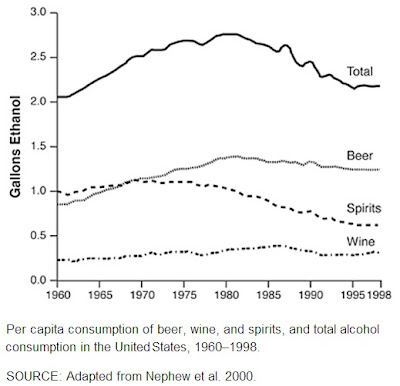 As discussed in a previous post, a high intake of omega-6 fats promotes the formation of inflammatory intermediates. Another possible explanation for the increased incidence of the diseases of Western civilization is the increased use of omega-6 rich vegetable oils in place of animal fats. As usual, correlation is not causation, but as shown in the graph below, the production of soybean oil for food consumption went from close to zero in 1935 to 25 pounds person per year in 1999. 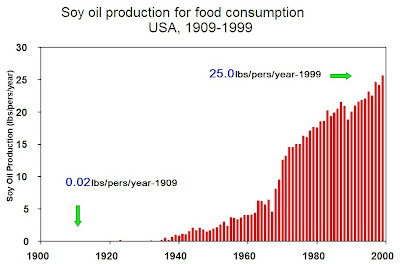 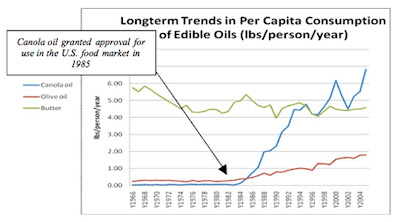 What do all of these graphs prove? Not a thing. Although they show associations, they cannot prove causation. But I present them for your consideration because they do give us some things to think about as we enjoy a low-carb summer. Have a happy, healthy June!
Posted by Stargazey at 3:41 PM

Pretty freaky visuals from the graphs of HFCS and O6s. Great post, thank you.

Oh---and you DID answer my question on cortisol, thanks again! ;)

Just wanted to wish you a safe trip. Have fun!

Thanks, LynMarie! We leave on May 31. I'm really excited, since we'll be seeing a whole bunch of places I haven't been to, plus a couple that I have and enjoyed very much. I'll miss you guys!

Vegetable consumption increased eh... I wonder what was considered a "vegetable" when that graph was created. If it includes potatoes and corn then that would change things quite a bit...

Have you found fat and protein consumption numbers going back to the 1900s? I know the data is flawed but I'm just curious what people like Keys saw when formulated the fat-heart disease hypothesis?

The important thing about Ancel Keys' research is that the data was cherry-picked. In 1957 two scientists, Jacob Yershalmy and Herman Hilleboe, noted that data were available from 22 countries, not just seven. They published a paper showing that when all 22 countries were analyzed, the cholesterol/saturated fat correlation to heart disease became much weaker, and the incidence of heart disease was more strongly related to sugar intake.

I don't have the data for fat and protein consumption going back to 1900, and I can only find references to the Yershalmy article (not the article itself), but you're welcome to put them here if you find them.

Thanks for the response. I'm really trying to recreate the data that led to the initial hypothesis rather than the data to later justify it. I don't believe Keys went in with selection bias. He saw fat consumption increase and heart disease incidence increase and made the hypothesis. From there it went downhill. I know that data is poor because the tracking of dietary intake wasn't formalized until the 1940s but nevertheless I thought it would be interesting to look at. I'll post if I find it.

For the corn-syrup/renal disease graph, how would that data compare with a country like Australia, which does not use corn syrup in significant amounts, but has similar problems with obesity (probably due to similarity in high-fat high sugar *recipes* being popular)?

I find the dramatic rise in the use of canola & soybean oils really curious; I wonder if it's mostly GMO and if there's a way to determine if that has any affect on the correlations.

Fluxtopia Mars--that's interesting about Australia not using much HFCS. I didn't know that.

It's possible that fructose is the culprit, and fructose makes up half of the sucrose molecule. So whether the fructose comes pre-digested in HFCS or covalently bonded to glucose in sucrose, the negative effects of fructose still occur once the molecule hits the liver.