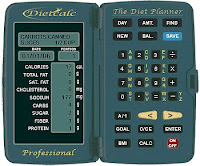 One of the great things about low-carbing is that (at the beginning anyway) low-carbers don't need to count calories.

Low-carbers do have to learn what a normal portion size is--a portion of macadamia nuts is 1/4 cup, not half a bag. A portion of cucumbers is 1/2 cup, not a whole cucumber. Low-carbers also need to learn that it's okay to subtract fiber carbs from their carbohydrate count. Once that's accomplished, it becomes a simple matter to look up various foods, figure out the carb content and add up the number of carbs consumed in a day. The target number is normally in the double digits, which is a fairly easy calculation for those of us who are arithmetically challenged.

Typically in a low-calorie versus a low-carb scientific study, the low-calorie group is given a target number of daily calories while the low-carb group is given a target number of daily carbs. When the results are tabulated, the net caloric intake will be compared between the two groups. Rather surprisingly, the two groups will have ingested almost the same number of calories. Examples are the recent study published in the New England Journal of Medicine and the A to Z Weight Loss Study published last year in JAMA. See Table 2 in each link for comparisons of daily energy intake from group to group.

Why do low-carbers unconsciously limit calories when they count carbs? One reason is the action of the signaling hormone leptin, discussed in the previous two posts. As low-carbers become more sensitive to the signals provided by leptin, they have an improved ability to perceive satiety. Their brains detect the leptin released by their fat stores and turn off the hunger signal at a caloric level that will allow them to use some of their fat stores for energy. The study group that eats a low-calorie diet without carbohydrate restriction will have a harder time getting the satiety signal. The participants in that group will have to turn off their eating at an intellectual level. When they have eaten the allowed number of calories, they have to consciously make themselves stop eating.

In comparison studies of weight loss, both the carb counters and the calorie counters end up eating approximately the same number of calories. Both groups lose weight in approximate proportion to their decrease in energy consumption. One of the considerations in choosing a weight-loss diet is the ease of complying with the diet. A controlled carbohydrate diet severely restricts the consumption of carbohydrate-containing foods but allows the dieter to eat to satiety. By contrast, a controlled calorie diet allows the dieter to eat balanced portions of whatever he or she wants, but requires the dieter to stop eating even if satiety has not been reached. As always, it's a tradeoff. The dieter decides which parameters are most important to him or her and chooses the diet that best fits those needs.
Posted by Stargazey at 2:52 PM

I agree, Sue! It's much easier for me get full and stay full on low-carb food. The one time I actually managed to lose weight on a low-calorie diet, I had to take prescription diet pills to keep my hunger under control.