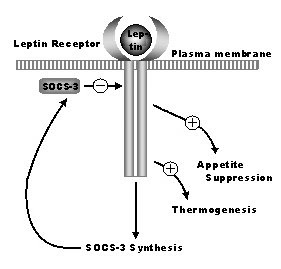 As described in the previous post, leptin is a hormone released by white adipose cells in the body. Leptin allows the brain to keep track of the body's fat stores. It also permits the brain to sense satiety in response to food intake. One of the ways to overcome triglyceride-induced leptin resistance is by following the low-carb lifestyle.

That's fine at the beginning of the weight-loss journey. But what happens to a low-carb dieter who is successful? What happens when a large percentage of the body's fat stores have disappeared?

In a formerly-fat person, leptin will still be released in response to insulin secretion. However, because there is less body fat to synthesize leptin, the consumption of food will cause less leptin to be released into the circulation. After a meal, the signal for satiety won't be as strong. If a person wishes to maintain a lower body weight, it will become important to maximize the response to the leptin that is released.

The illustration above shows leptin on the outside of a cell, bound to its receptor (the pincer-like structure that crosses the plasma membrane or cell wall). The leptin receptor transmits several signals into the cell, including signals for satiety and increased thermogenesis. Another signal that is sent causes the production of a protein called SOCS-3, a member of the family called Suppressors of Cytokine Signaling. SOCS-3 is a protein that shuts down the signaling of the leptin receptor. The pattern of a signal producing a response which then produces downregulation of the response is quite a typical one in the body. Including an automatic off switch on metabolic reactions keeps reactions under tight regulation and control.

In the case of leptin signaling, it is normal for the leptin response to be downregulated within a few hours. The SOCS-3 protein shuts off the satiety signal and allows the rate of metabolism to decrease. Within a short time, the SOCS-3 protein itself is degraded and the leptin diffuses away from its receptor. This in turn resets the leptin system, allowing it to be ready to respond in time for the next meal. The result is a cycle of eating, satiety, and the gradual return of hunger. Unfortunately for the person who has successfully lost weight, this system can also become leptin resistant.

Consider the case in which leptin is released continuously from the fat cells. One way this could happen is when frequent small meals are eaten. Each feeding will cause the release of insulin, which in turn will cause the release of leptin. The constant presence of leptin on its receptor will prevent the receptor from resetting itself. It will no longer be able to send adequate signals for satiety and increased thermogenesis. The result, inevitably, will be weight gain.

One way to counteract this type of leptin resistance is to allow five to six hours to pass between meals. This will allow the receptor to reset itself and to become sensitive to leptin the next time leptin is released. Even though less leptin is produced by the diminished fat stores, if meals are taken at 5-6 hour intervals, if meals are eaten slowly to allow the leptin signals sufficient time to reach the brain, and if a low-carbohydrate lifestyle is maintained, this will allow the available leptin to have a maximal effect in producing its desired effects of satiety and increased thermogenesis.
Posted by Stargazey at 11:03 AM