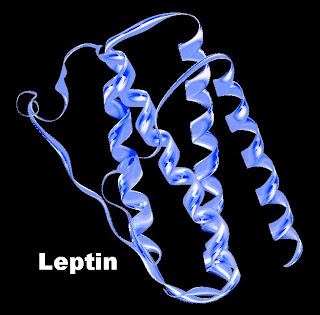 Leptin, pictured above, is a hormone produced by fat cells. When we eat a meal containing carbohydrate and/or protein, our pancreas releases insulin. Insulin, in turn, causes the body's fat cells to release leptin into the circulation.

The receptors for the hormone leptin are found in the brain, most abundantly in a structure called the arcuate nucleus of the hypothalamus. When leptin binds to its receptor, it sends several sets of signaling cascades into the brain. Since food has just been eaten, one set of signals acts to downregulate the appetite, while another set of signals tells the body to increase its metabolic rate to burn the calories that are now available. So far, so good.

But what if the leptin receptors in the arcuate nucleus fail to "see" the leptin that has been released by the fat cells? Leptin in the blood does not simply diffuse into the brain. It has to enter the brain through a specific transport system. In 2004 it was shown that high triglycerides in the blood will prevent leptin from being transported into the brain. In other words, a fat person can eat a meal, release plenty of leptin, and his brain will receive only a weak signal that it needs to downregulate appetite and upregulate metabolism. That person is leptin resistant. Because of the leptin resistance, his body will create a higher set point for appetite and a lower set point for metabolic rate than it would normally need.

Obviously this is not a good situation. If a person has leptin resistance, can it be circumvented? How can the resistant leptin receptors in the hypothalamus "see" the leptin that is being produced by the fat cells of the body?

Because excessive serum triglycerides are blocking the entrance of leptin into the brain, one possible solution would be to reduce serum triglycerides. As we have discussed in a previous post, numerous studies have shown that low-carbohydrate diets consisently and significantly reduce the level of triglycerides in the blood. (See Volek & Feinman, Table 4, percent change in TAG.) As triglyceride levels decline, leptin responsiveness increases. With this in mind, it is not surprising that people who eat a low-carb diet experience better control of their appetite and an increase in metabolic rate compared with those whose meals are higher in carbohydrates.

When people follow a low-carb lifestyle, the leptin they produce is able to reach their leptin receptors, to tell their brains that they are full and to upregulate their body's metabolism to utilize the food they have just eaten. Because they have lowered their serum triglycerides, their bodies will have a lower set point for appetite and a higher metabolic rate than they did when their brains were not "seeing" the leptin that their fat cells were producing.

If a low-carber decides to return to his or her former way of eating, triglycerides will rise and the set points for appetite and metabolism will restabilize at their previous values. Inevitably, any weight that was lost will eventually return. The regulation of leptin sensitivity helps explain why low-carb eating does not work very well as simply a short-term diet, but needs to be done over the long term as a lifestyle change.
Posted by Stargazey at 10:13 PM

Very informative blog. So, is it the TAGs that interfere with the leptin or the roller coaster of insulin on a high carb diet that clears the blood stream of nutrients that doesn't allow for appetite suppression? I guess they could just be two sides of the same coin.

Thanks for the good words, MAC.

I think you're right about the two sides of the same coin argument. Except that my take is that it's the constant flow of insulin from constant eating that doesn't allow for a "reset" to be done with the leptin. I'll be posting more on that next time. But feel free to disagree. I'm delving more into speculation rather than settled science with my posts on leptin.

Truly lovely blog, with all the science to back it up. Thanks very much. I have a question about caffeine - where does it fit in the insulin / blood sugar regulation relationships? Have just started Atkins and am following the rules, save for the caffeine one.

Thanks for the compliment, Helen!

Unfortunately, I can't give you a good answer about caffeine. It's a stimulant, so I would speculate that it might transiently increase the metabolic rate. On the other hand, there are articles like this one, "Caffeine ingestion increases the insulin response to an oral-glucose-tolerance test in obese men before and after weight loss" that indicate that caffeine ingestion contributes to insulin resistance.

If you do indulge, be sure to remember that coffee contains about one carb per cup. If you add cream and packets of artificial sweetener, the carbs start to add up. If you take your caffeine in the form of soft drinks, it's good to remember that those often contain citric acid, which can stall weight loss in some people.

Probably moderation is the key, but that's my personal opinion, not anything science-based.