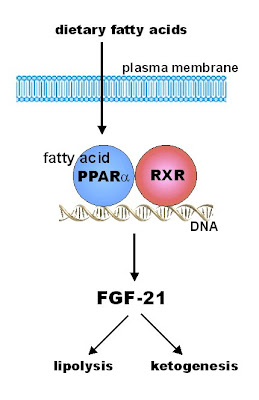 Many aspects of the low-carb lifestyle are surprising. For example, the successful low-carber soon learns that he or she must eat fat to lose fat. Why would that be?

A possible explanation comes from a couple of studies published last summer in Cell Metabolism, one by Inagaki et al and one by Badman et al. For those who are interested in the specifics, see the PDFs here and here. These studies were performed in mice but were quite exhaustive and appear to have application to humans as well.

The requirement for eating fat to lose fat begins with a cellular receptor called peroxisome proliferator-activated receptor-alpha or PPAR-alpha for short. PPAR-alpha is a protein found inside liver cells. When dietary fat diffuses into the liver cell as fatty acids, the fatty acids are able to bind to PPAR-alpha and activate it. Activated PPAR-alpha then binds to another protein called the retinoid X receptor or RXR, and these dimerized proteins in turn are able to bind to the cell's DNA. In so doing, they enhance the production of a third protein--fibroblast growth factor-21 or FGF-21.

FGF-21 is secreted by the liver and produces several effects. In white adipose tissue, it stimulates lipid breakdown. The breakdown of stored lipids allows them to be used as fuel. In the liver, FGF-21 upregulates ketone body production. Ketone bodies provide another source of fuel. The two studies showed that production of FGF-21 was greatly enhanced when the mice were fed a low-carb/high-fat (ketogenic) diet. When few carbohydrates are provided in the diet, but the diet does contain fat, mice are able to switch to an efficient mode that allows them to consume stored fat for energy. Mice are not people, and the usual admonition applies--more research is required. But the observation that a ketogenic (low-carb/high-fat) diet allows mice to produce lots of FGF-21, mobilize fat stores and upregulate ketone production suggests an explanation for what low-carbers know by experience--you have to eat fat to lose fat.
Posted by Stargazey at 9:09 PM

I really love this blog because of the efford you make to explain things. Thank you very much ! Can you maybe tell us a tiny little bit more about yourself? Are you a biochemical student/doctor ? :) Would really be nice to know.

Good guess, Jaycee! I have a Ph.D. in medical biochemistry. My dissertation was on insulin receptor signaling. I don't use the Ph.D. much in my current line of work, but this blog has been a good opportunity to get those neurons firing once again.

I just got back from a trip to Barcelona with my husband and am now very far behind in my real-life responsibilities. I won't be able to post anything for a while, but in the meantime, please feel to browse amongst the older posts. Most of them aren't time-sensitive, but contain what I hope is interesting background, giving some of the science that explains why the low-carb lifestyle works so well.

Noooo dont you go quiting on this fab blog now! Your info has been such a source of insperation and I will send my insulin-receptors to hunt you if you wont post again :) haha...

Stargazey, this is another of my "favourite" posts on this blog.

I'm not used to eating a lot of fat, but I find that if it's the "right" fat (in my case milk fat from a tasty plain full-fat yogurt I have found), I have no trouble with it at all and don't feel queasy. Nice to know that I'm actually doing good things for my metabolism.

I do hope that you come back when you have some time, and put up more posts. The low-carb subject may not be inexhaustible, but there are still a few more avenues. One that causes some confusion is: where does alcohol fit in to low-carb diets? I used to lump alcohol in with carbs, since it works quickly to provide calories, but I've since learned that it is not metabolized the same way, nor does it raise insulin. In my new understanding, it is metabolized quickly and therefore defers desired fat metabolism until it is consumed.

But I bet that you could shed more light on this!

Hi, Woodswalker! I'm almost though my real-life do-list and hope to be able to start posting again next week.

Thanks for the suggestion about alcohol and low-carbing. I drink about two ounces of low-carb beer every month or so, so I haven't done much thinking about alcohol versus carb metabolism. But I'll look into it and see what I find!