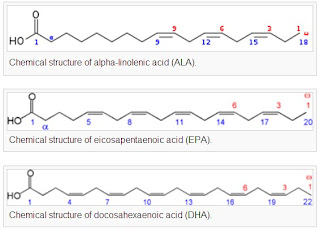 Certain dietary deficiency diseases are quite straightforward. For instance, if we don't consume enough vitamin C for a long period of time, we will develop scurvy. Children who don't get enough vitamin D and/or calcium, will suffer from rickets. Adults with a persistent deficiency of vitamin D and/or calcium will eventually experience osteopenia and perhaps osteoporosis.

Other dietary deficiencies produce less obvious symptoms. As early as the 1920's, it was noted that a complete dietary deficiency of fatty acids produced impaired growth in animals. When this was investigated farther, it was found that the omega-3 and omega-6 fatty acids were particularly important for growth and development.

Now a detour to explain some nomenclature. Fatty acids are the carbon chains that are attached to glycerol backbones to form triglycerides. Illustrated above are three such fatty acids, alpha-linolenic acid (ALA), eicosapentaenoic acid (EPA) and docosahexaenoic acid (DHA). The zig zag lines are a form of shorthand that circumvents the necessity of writing out all the carbons and hydrogens found in these molecules. Each inflection of the zig zag (plus the right end of the zig zag) represents a carbon atom. Count these points on ALA, and you will find 18 carbon atoms. On DHA there are 22. The straight lines between the points represent covalent bonds. A single straight line between two carbons is a single bond, also called a saturated bond. A double line between two carbons is a double bond, also called an unsaturated bond. You can see that all three of these fatty acids contain several unsaturated bonds, which is why they are called polyunsaturated fatty acids.

As Lands describes it, in 1963 it was discovered that one of the omega-6 fatty acids could be converted to a signaling molecule called a prostaglandin. Prostaglandins act on the vascular system, affect platelet aggregation and regulate inflammation. Further research revealed that omega-3 and omega-6 fatty acids could be converted to a large set of short-lived locally-acting signaling molecules called eicosanoids. Along with the prostaglandins, these include thromboxanes, leukotrienes and prostacyclins. Representative examples are illustrated below. (Both figures in this post are modified from figures found at Wikipedia.) 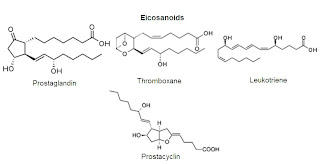 There are dozens of eicosanoid molecules, and each of them has many actions. Because of this, there is no simple relationship between a deficiency of omega-3 and omega-6 fatty acids and a defined profile of symptoms. When taken in optimal amounts, the eicosanoids promote the health of the cardiovascular system, the central nervous system, and the immune system. For scientific citations, please see the extensive Notes and References section at the end of the Wikipedia article on Omega-3 Fatty Acid. Positive effects have been shown for lowering blood pressure, improving blood lipid profiles, decreasing the risk of stroke and preventing psychotic disorders.

This is a great article -- I've been asked a number of times about why I try to balance n-3/n-6 intake and what the difference is. I'll now point those people here.
You've summed it up very well and also added some valuable chemistry to the mix.
Thanks!
-Dave B

Eager to see your take on new research:

NEW YORK (Reuters Health) – Cutting down on carbs may help people lose weight, but it may not be so good for lowering cholesterol, new research shows.

People who ate a diet low in carbohydrates but relatively high in fat lost the same amount of weight over six weeks as those who consumed a high-carb diet.

But levels of low-density lipoprotein (LDL) or "bad" cholesterol increased significantly in the low-carb group, while they fell in the high-carb group. High LDL levels are a risk factor for heart disease because they are linked to clogged arteries....

Thanks, vgdave! I must admit that I've learned a lot in the process of writing this blogpost. I had no idea that the eicosanoids had so many positive effects, and I didn't understand very well why the balance of omega-3's and omega-6's is so important. (I'll try to explain more about that in the next post.)

Also, thanks for the props on the chemistry. :-) I'm used to thinking in those terms, but most people haven't had the fun of learning how to decipher chemical structures and names. For me, it's empowering to know that chemical names will often reveal important things about the structure and function of the molecule.

Hi, John. I think this is the abstract of the article in the American Journal of Clinical Nutrition. There is a news article by Reuters that gives more details, but so far I can't find the main text of the original publication.

Because of that, I can't be sure about a bunch of things.

1. First of all, the two groups showed no difference in fasting triglycerides. That is extremely unusual. Normally low-carb can be depended on to lower triglycerides.

2. There was no significant difference in weight loss over six weeks. That is also unusual. Over a year or two the difference between weight loss on low-carb and high-carb diets will even out, but in most cases low-carb outperforms high-carb in the short term.

**This suggests that something was odd about the low-carb diet they used. I wonder how they made sure that subjects were complying with it. Did they measure ketones, for instance?**

3. Regarding the LDL: I wonder if it was measured directly or if it was a calculated LDL? If it was calculated, it must be remembered that the Friedewald formula often gives erroneous results for the LDL of low-carbers. For low-carbers, the Iranian equation will usually be closer to actual measured values. Here is a calculator that gives both results.

Bottom line--you might want to wait before you give up your low-carb lifestyle if you are basing your decision on the incomplete information we have seen so far from this study.

Stargazey
This is really helpful thank you. Should one aim for a 1:1 ratio of n3 : n6 in the diet? I look forward to your next post.

Hi, Helen88! This article indicates that the ratio of omega-6 to omega-3 depends on the particular condition being treated. I expect that the total intake of omega-6, and the specific type of omega-3 (ALA, EPA or DHA) as well as the particular individual also have an effect. You might try a ratio of 1:1 and monitor yourself for several months to see how you feel. As always, please remember that I am not a physician and I'm very unqualified to do diagnosis and treatment. :-)