More on Omega-3 and Omega-6 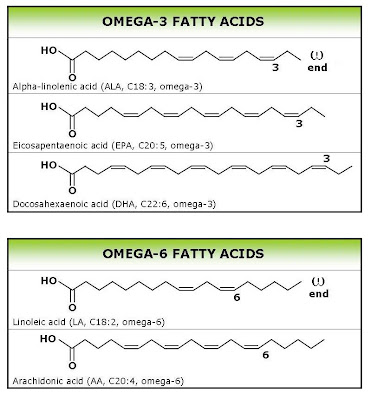 Omega-3 and omega-6 fatty acids are long-chain polyunsaturated fatty acids. They cannot be synthesized by the human body, but are important for growth, for cardiovascular health and for immune function. They may also be involved in a variety of other health-related issues including the prevention of cancer and of central nervous system disorders. Their effects are somewhat non-specific, but because the omega-3s in particular have shown positive effects in many controlled double-blind prospective scientific studies, people who are interested in nutrition are also interested in the omega-3 and omega-6 fatty acids. This blogpost, and the previous one, attempt to explain a few principles that may make it easier for readers to evaluate their own use of these essential fatty acids.

The omega-3 and omega-6 fatty acids are unbranched molecules ranging from 16 to 24 carbons in length and carrying from two to six unsaturated bonds. The most common forms are illustrated above. When they are ingested in the diet, these polyunsaturated fatty acids gradually become incorporated into the phospholipid bilayers that form the cell walls of most of the cells in our bodies. As phospholipids, the omega-3 and omega-6 fatty acids affect the flexibility and permeability of the membrane surrounding each cell. They also exist in equilibrium with the unsaturated free fatty acids that circulate in our blood. It is this pool of free fatty acids that is used by the body as precursors for the eicosanoid signaling molecules, i.e., the prostaglandins, thromboxanes, leukotrienes and prostacyclins.

From a survey of the omega-3 literature, it appears that the longer the molecule, the more biologically potent it is. (An example is found here.) The body is able to convert one form of omega-3 fatty acid to another, but it is not particularly efficient at it. For instance, although flax seed oil is rich in alpha-linolenic acid (ALA), ALA (18 carbons) is converted into EPA (20 carbons) at an efficiency of about 5-10% and into DHA (22 carbons) at an efficiency of about 2-5%. Recent studies indicate that in some individuals the conversion rates may be less than 1%. By contrast, EPA and DHA can be obtained directly from fish oil and require no modification to provide maximum protection against conditions such as coronary artery disease. Vegetarians and those who are allergic to fish will be able to eat extra ALA to compensate for the poor conversion rate to EPA and DHA, but they must bear in mind that not all omega-3s are created equal.

Another consideration in omega-3 and -6 fatty acid intake is the interchangeability of the omega-3 and omega-6 fatty acids in the eicosanoid synthesis pathways. Take a look at the figure above. EPA (eicosapentaenoic acid) is an omega-3 fatty acid with 20 carbons and five double bonds. AA (arachidonic acid) is an omega-6 fatty acid with 20 carbons and four double bonds. Superficially, they look very similar. These molecules also look similar to the enzymes involved in eicosanoid synthesis and, as such, they compete with one another. Metabolites of omega-6 fatty acids, particularly metabolites of arachidonic acid (20 carbons), are significantly more inflammatory than those of omega-3 fatty acids. This becomes important because the Westernized diet has a fatty acid ratio of omega-6 to omega-3 that falls between 10:1 and 30:1. If our dietary raw material is almost all omega-6 fatty acids, the metabolites will be predominately pro-inflammatory. For some interesting lists of omega-6 sources, see here. I can't vouch for the accuracy of the lists, but in general they provide some surprising insights.

One way to decrease the omega-6-derived inflammatory intermediates is simply to replace omega-6 polyunsaturated fats with saturated and monounsaturated fats. (A recent journal article suggests that eating saturated fat is not as dangerous as previously thought.) Saturated and monounsaturated fats provide energy, but they cannot be converted into eicosanoid signaling molecules. Another strategy is to take advantage of the metabolic competition between omega-3 and omega-6 fatty acids by replacing the intake of omega-6s with omega-3s. Although the omega-3 fatty acids can be pro-inflammatory when eaten to excess (probably more than three grams per day), in general they will form less-inflammatory signaling intermediates and will also decrease the omega-6-stimulated production of small pro-inflammatory proteins called cytokines.

A review article on omega-3 fatty acids suggests setting a goal of an omega-6 to omega-3 ratio between 1:1 to 1:4, though it gives no rationale for these numbers other than speculation that that was the ratio consumed by our ancestors. The article also recommends consuming fatty fish three times per week. Unfortunately the oceans are no longer pristine, and fish tend to contain pollutants such as mercury, PCBs and dioxin. For those who prefer not to take the risk, purified fish oil supplements are available from manufacturers who use high-vacuum, low-temperature molecular distillation to purify their fish oils. Another source of EPA and DHA is krill oil, which comes from animals that are low on the food chain and therefore low in pollutants. Krill oil is quite expensive, however. Meat, eggs and plant sources also contain omega-3s in varying amounts. For the obsessive-compulsive, here is a list of the total omega-3 content of 200 calories' worth of various foods.

Omega-3 and omega-6 fatty acids are essential for life. They also affect the quality of life in positive and negative ways. Because they are stored in the phospholipid bilayers of our cell membranes, they take a long time to act. They must build up, reach an equilibrium with their free fatty acid form in the blood and then be converted to intermediates. For that reason, it may take weeks or months before a negative effect starts to decline or a positive effect is noticed. However, there are many scientific articles that indicate that it may be worth the time, effort and expense of attending to our intake of these essential fatty acids.
Posted by Stargazey at 8:47 PM

Complete with a link for the obsessive -compulsive!
Great and timely facts, Stargazey!
Chia seeds need their own post on your blog!

Thanks, anne h! So you eat chia seeds? In salads? By the handful? As far as I know, I've never had them.