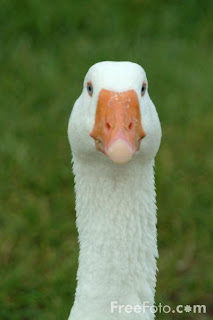 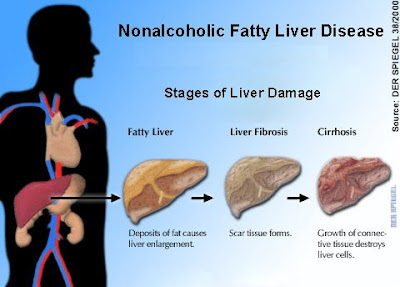 While these studies do not offer conclusive proof that a low-carbohydrate diet should be used to counteract and possibly reverse nonalcoholic fatty liver disease, the findings are encouraging and will be followed up by Dr. Browning and his associates in their next study.
Posted by Stargazey at 6:40 PM 13 comments: 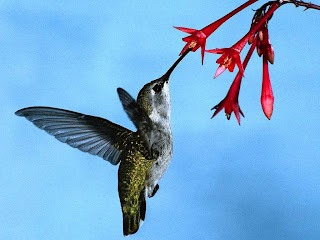 Rats are not humans. Nevertheless, it is possible to suggest that eating or tasting sweet food causes an overstimulation of the dopamine signaling system. This produces a downregulation of dopamine signaling such that, in the absence of sweet, there is a noticeable decrease in energy, motivation and mood. Sweets are legal, cheap and easy to obtain. If the sweet-eater wishes to experience the pleasant feelings associated with dopamine overstimulation, it will be very easy to continue eating sweets. And if he is unable to wait several days to a week to allow the body to return to its normal level of dopamine production and receptor activity, it will be harder than he might have expected to eliminate sweet tastes from his diet.
Posted by Stargazey at 2:41 PM 6 comments: 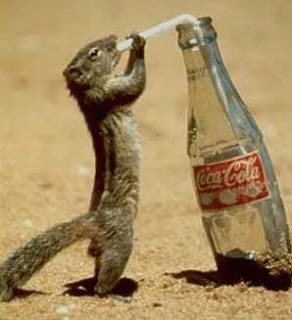 Those who read food labels realize that high fructose corn syrup is added to all sorts of products, from pickles to yogurt to spaghetti sauce. The Corn Refiners Association says this is because high fructose corn syrup enhances flavor and increases shelf life. A recent article in the journal Physiology and Behavior suggests that there may be another reason.

The article, called Modified sham feeding of sweet solutions in women with and without bulimia nervosa, was designed to show whether people who experience binge-eating episodes might overrespond to the stimulations of taste and smell. As it turns out, they do not, or at least they did not in this study. However, the study did produce an interesting outcome in terms of the way people respond to sweet tastes.

The study compared two groups of women--ten healthy women (termed NC, or Normal Control) and eleven women with Bulimia Nervosa (termed BN). The women were given solutions of cherry-flavored Kool-Aid sweetened with aspartame in concentrations of 0, 0.01, 0.03, 0.08 and 0.28%. (The 0.08% solution approximates the sweetness of commercial soda.) There were three trials in which the five solutions were prepared in five opaque containers, each fitted with a straw. The solutions were presented in a random order, using a one-minute access period during which the women could sip as much as they wanted of that particular solution, but they could not swallow it. They were instructed to spit out the solution into another opaque container. (The amount sipped and the amount spit out was later measured by the investigators.) The women were then asked to

1. Rate the sweetness of the solution

2. Rate how well they liked the solution

3. Rate how much they wanted more of the solution 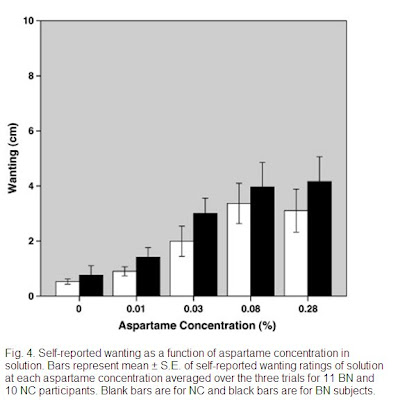 For both groups of women, more sweetness led to more liking, more sipping and more wanting. This was not a function of actually consuming the sweetened solutions, but simply of having the solutions in their mouths for a few seconds. Using this information, it not unreasonable to suggest that the increased use of another sweet substance, high fructose corn syrup, in all sorts of foods, may have the unintended result of producing more liking, more eating and more wanting of the products that contain it.
Posted by Stargazey at 9:24 PM 3 comments:

But you have to eat carbohydrates! 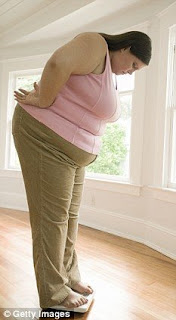 Perhaps you overdid it a bit at Christmas and are looking for a weight-loss plan. Although low-carb diets are currently out of fashion, they have one big advantage over low-calorie, low-fat diets. They work.

Ordinary people can lose weight and keep it off by following a low-carb eating plan. Not only that, they will notice an improvement in blood pressure, HDL cholesterol, triglycerides, and insulin responsiveness. So why don't more people attempt weight loss through the low-carb lifestyle?

One big reason is that people are told (incorrectly) that their body requires them to eat a certain amount of carbohydrate every day. The brain requires glucose to function, and several other tissues require carbohydrate-derived fuels as well. If a person doesn't eat any carbohydrates, where does this fuel come from?

It comes from proteins. After proteins are eaten, they are broken down into their building blocks, which are called amino acids. These amino acids can be reassembled into other proteins. Some of them can be converted into fat. And thanks to a metabolic process called gluconeogenesis, up to 400 grams of them per day can be converted into carbohydrates.

Since the brain requires only about 120 grams of carbohydrates a day, that's well within a safe range. It does take a few days for the enzymes of gluconeogenesis to be induced, permitting conversion of enough glycogenic amino acids into glucose to supply the tissues that require it. During the transitional period, typical symptoms may include body aches, nausea and headaches. These will subside after about three days, and energy levels and alertness will improve noticeably. To figure out how much protein to eat to permit adequate carbohydrate synthesis, Jenny Ruhl has provided this convenient Protein Need Calculator.

If you need to start a weight-loss plan, there are many good diets available, including many versions of low-carb diets. Check out your options and pick the diet that suits you the best. And if you choose the low-carb lifestyle, be assured that thanks to gluconeogenesis, you can safely drop most or even all of the carbohydrates from your menus!
Posted by Stargazey at 8:51 PM 1 comment: