Vacation // Can Leptin Keep You Light? 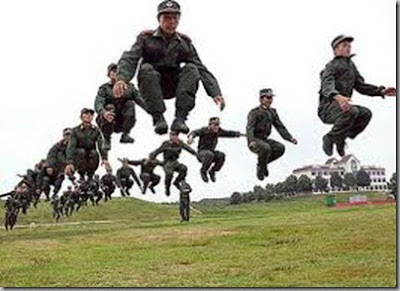 On May 31 hubby and I leave for a 14-day vacation in Northern Europe. I will have limited access to the internet, so go ahead and leave comments if you wish, but they may end up in comment limbo for a fairly long time. I probably won't be able to respond to questions very well, and you may have to wait until I return to get a detailed answer.

While I'm gone, I'll give you something to think about. During the last few days I've been having fun over at Stephan Guyenet's Whole Health Source blog. Commenters have been discussing his post on Food Reward: a Dominant Factor in Obesity, Part IV and have started thinking about the effect of leptin on the prevention of weight regain following a significant weight loss. Commenter ItsTheWooo2 has lost over 160 pounds but is now faced with the lifelong challenge of maintaining that weight loss. She noticed that when she began taking injectable synthetic leptin as an experimental treatment for hypothalamic amenorrhea, the leptin made it much easier for her to stay at her goal weight. Wooo has some rather strong opinions, but she also explains herself well, and the comments are worth reading if you have the time.

During the discussion, Stephan mentioned the work of Rudolph L. Leibel at Columbia University. Conveniently, one of the commenters gave a link to a blogpost summarizing Dr. Leibel's work on lepin, Why is it so Hard to Maintain a Reduced Body Weight? The blogger, Arya M. Sharma, M.D., has a couple of followup posts entitled Why Hyperleptinemia is Not Leptin Resistance and Using Leptin to Treat Obesity.

If you would like to look at some of the primary literature on the topic, here are several articles: Low Dose Leptin Administration Reverses Effects of Sustained Weight-Reduction on Energy Expenditure and Circulating Concentrations of Thyroid Hormones
[2002], Low-dose leptin reverses skeletal muscle, autonomic, and neuroendocrine adaptations to maintenance of reduced weight [2005], and Leptin reverses weight loss–induced changes in regional neural activity responses to visual food stimuli [2008].

It has been nearly ten years since the first of these studies was published. One wonders why such an efficatious drug is not being prescribed far and wide for the maintenace of weight loss. According to Dr. Sharma, this has to do with a peculiarity in the regulations of the FDA. Drugs can be licensed for weight loss, but except in extremely rare cases, leptin does not work for weight loss. However, the FDA does not recognize a need for drugs to preserve weight loss once it has happened. Leptin is a drug that works for a condition that the FDA does not believe exists. The FDA does not understand that, while weight loss is hard, weight maintenance is even harder. If you think that synthetic leptin might help you hold on to your hard-won weight loss, it might be time to send the FDA a letter.
Posted by Stargazey at 6:42 PM 6 comments: 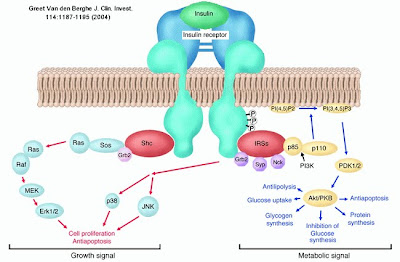 If you have done much reading about the low-carb lifestyle, you have heard about insulin. Insulin is a hormone secreted by the pancreas after we eat carbohydrate or to a lesser extent when we eat protein. Insulin is important because it binds to the insulin receptor, which is found on the surface of most of the cells in the body. The figure above shows the surface of a cell with a molecule of insulin bound to its receptor.

Insulin signaling
The insulin receptor is made of four protein subunits. The two beta subunits pass from the exterior through the cell wall and into the interior of the cell. When insulin binds to its receptor, the receptor auto-activates and begins to affect a large number of signaling proteins that reside within the cell. As illustrated on the left side of the drawing, some of these proteins propagate growth signals to the nucleus of the cell. We’ll deal with those later. The proteins shown on the right side of the drawing transmit metabolic signals into the cell. Depending on the type of cell, this signaling cascade can cause the uptake of glucose and amino acids into the cell, the synthesis of glycogen in the cell, the synthesis of protein in the cell, the cessation of lipolysis in the cell and the inhibition of de novo glucose synthesis in the cell.

Insulin sensitivity
So far so good. Insulin is such a powerful hormone and it has so many effects that its absence is incompatible with life. However, an excess of insulin is not particularly good either. When too much insulin is present, the metabolic signaling cascade becomes too strong. The cells defend against excessive signaling by degrading some of their insulin receptors and by making fewer receptors to replace the ones that have been destroyed. Some of the intermediate signaling proteins are also downregulated in various ways. The cell is said to have become “insulin resistant.”[1]

Normally insulin resistance is not a problem. As insulin levels fall, the synthesis and/or activation of signaling intermediates resumes and the cell becomes ready for the next onset of insulin release. In native cultures like the Inuit, where carbohydrate intake is low, the levels of blood insulin only rise a modest amount in response to ingested protein. In non-Westernized cultures like the Kitavans of Papua New Guinea, a large amount of carbohydrate is consumed, but it comes in the form of sweet potatoes, cassava, taro and yams.[2] These people have a low fasting insulin that decreases with age. [3] Kitavans also have low obesity, low diastolic blood pressure, and low-to-no incidence of stroke or ischemic heart disease. If Kitavans can maintain insulin sensitivity and good health while eating a high carbohydrate diet, why should we even consider the challenges of attempting a low-carb diet?

What kinds of carbs?
The answer probably involves the types of carbohydrates we consume rather than the absolute percentage of carbohydrates in our diet. Post-800 AD, the Aztec consumed maize as their most important staple. They were known to suffer from dental problems, obesity and heart disease.[4, Comments] The ancient Egyptians ate bread and porridge made from wheat and used barley to make beer.[5] They suffered from periodontal disease, and atherosclerosis was found in 60% of those who lived past age 40.[6] In Good Calories Bad Calories (pp 89-97), Gary Taubes gives numerous examples of native peoples (Gabonese, South Africans, Native Americans, Melanesians) who did not experience chronic diseases such as obesity, diabetes and heart disease until after well-meaning explorers and settlers, beginning in about the middle of the nineteenth century, brought them large quantities of white flour and sugar.

Permanent insulin resistance
Although the proof is only inferential, it appears that carbohydrates such as refined grains, beer and sugar may have the ability to cause permanent insulin resistance in susceptible individuals who consume them. The effect is not immediate. For some reason, after years of eating these types of food, some people progressively lose the ability to reset their metabolic insulin response system. Muscle cells require more insulin to take up glucose. Liver cells require more insulin before they will stop making glucose through gluconeogenesis. It becomes harder to shut down lipolysis and it becomes more difficult to maintain muscle mass. On the other hand, the action of insulin as a growth signal is not impaired (see the left side of the figure above). A steady, high level of insulin produces proliferation and migration of vascular smooth muscle cells, and these in turn play an important role in diseases such as hypertension, atherosclerosis and cardiovascular disease.[7]

Strategies
It appears that once the metabolic insulin signaling system is broken, it cannot be repaired. It can be treated with drugs, or it can be managed by eating foods that minimize the release of insulin. For those who spend their lives eating the types of carbohydrates that indigenous peoples do, insulin is a good and faithful servant. It helps them metabolize and store their food for later use and performs a myriad of functions without causing insulin resistance. But for those who have spent too many years indulging in sugar, high-fructose corn syrup, refined grains, beer and other easily digestible carbohydrates, it may be necessary to switch to a diet that keeps insulin secretion at a minimum, i.e., a diet low in all kinds of carbs, in order to achieve and maintain a healthy lifestyle.
Posted by Stargazey at 9:06 PM 9 comments: