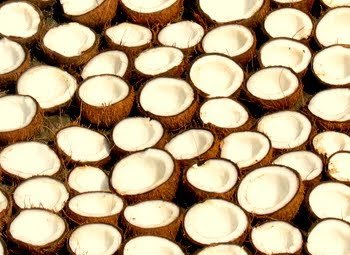 (This is another post referencing my own experiences. I present it in case someone else might want to give coconut oil a try for weight issues.)

The past
Coconut oil is the stuff that used to make movie popcorn taste like movie popcorn. When somebody realized that coconut oil is 90% saturated fat, things changed in a hurry. Movie popcorn began to taste more like the cardboard tub it comes in, and coconut oil became hard to find. Recently coconut oil has come back into favor in the low-carb world, and it can be purchased in health food stores and even in grocery stores.

I began using coconut oil several years ago and noticed that when I did so, I was better able to control my weight. I didn't mind the taste too much, but I was no particular fan of it either. (Nutiva seems to me to be the best-tasting brand so that's what I buy, but there are many other extra virgin organic coconut oils on the market.)

The present
About two months ago, as a sort of personal experiment, I began eating two tablespoons of coconut oil for breakfast. Just 250 calories of coconut oil, plus my supplements, seemed to hold me until lunch, which was a surprise. Not only that, I didn't seem to be quite as hungry during the rest of the day. Not only that, I seemed to do much better at weight maintenance than I have for many years. I was curious about why it worked, but didn't have the time to puzzle it out.

The explanation
Then one day as I was reading an article over at the Heart Scan Blog, I happened upon a comment by Might-o'chondri-AL (#23 in the list). He explained that coconut contains a 12-carbon saturated fat called lauric acid, and that lauric acid upregulates the secretion of glucagon-like peptide (GLP-1). GLP-1 in turn increases satiety by slowing stomach emptying.

I checked out the fatty acid profile of coconut oil and found that, sure enough, it contains about 50% lauric acid. Next I did a Google search and found a journal article that backed up the rest of Might-o'chondri-AL's statements: Effects of intraduodenal fatty acids on appetite, antropyloroduodenal motility and plasma CCK and GLP-1 in humans vary with their chain length.

By 45 minutes of infusion, plasma GLP-1 increased significantly and stayed high in subjects who received C12, while plasma GLP-1 in the C10 group was no different from control. (Remember, GLP-1 slows gastric emptying.) Cholecystokinin (CCK) is a peptide hormone that also produces satiety by decreasing the rate of gastric emptying. By 30 minutes, both C10 and C12 had increased CCK over control, but C12 did so to a greater extent. Gastro-duodenal motility was measured directly using a manometric catheter. Consistent with the GLP-1 and CCK levels, C12 suppressed both antral and duodenal pressure waves while C10 did not. Finally, at the conclusion of the infusion, subjects were offered a buffet meal. Subjects who had received C12 ate significantly less than those who had received C10 or water. In other words, intraduodenal infusion of lauric acid (C12) decreased gastric motility and suppressed the appetites of subjects who received it.

More data
A 2010 review article by Little and Feinle-Bisset confirmed these findings and added a few more. The presence of fatty acids like lauric acid in the intestine (and possibly even in the mouth) stimulates the secretion of hormones that suppress gastric emptying (GLP-1, CCK, and peptide YY) as well as down-regulating the hunger hormone ghrelin. A lauric acid infusion also appears to be able to signal the brainstem and hypothalamus directly via the vagus nerve and a CCK receptor mediated pathway. In addition to all of that, lauric acid is classified as a medium chain fatty acid. Unlike longer-chain fatty acids, it can be absorbed directly from the gut, transported to the liver, and there be readily converted into ketone bodies and used for energy rather than for fat storage. Both in suppressing energy intake and in improving energy utilization, the lauric acid found in abundance in coconut oil looks like a good candidate to help with weight loss and weight maintenance.

To be fair, the Little and Feinle-Bisset review article goes on to state that some studies have shown that a high-fat diet or the presence of obesity may attenuate the effects of fat intake on slowing gastric emptying and decreasing energy intake. However, none of the studies they cite were done in the context of a low carbohydrate intake.

The result
In any case, after reading these articles, I now understand why coconut oil seems to be such a help to me in weight maintenance. Whether that will hold true in the long term or whether it will work for other people is not certain, but for now personal experience seems to be backed by a fair amount of science.
Posted by Stargazey at 8:43 PM 31 comments: