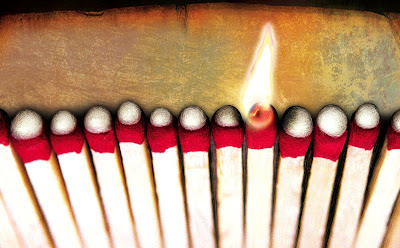 AIDS, the common cold, and measles are examples of diseases that are known to be contagious. A recent article in PLoS Computational Biology describes another medical condition that is contagious--obesity.

Obviously, obesity is not commonly thought of as a transmissible condition. Perhaps if you believe that you should feed a cold and starve a fever, there might be a contagious element to obesity, but that's stretching it. However, one of the authors of the PLoS article, Nicholas A. Christakis, had observed in an earlier article in the New England Journal of Medicine that members of the Offspring Cohort of the Framingham Heart Study were 57% more likely to become obese if they had a friend who became obese during a certain interval.


An infectious model for obesity
In 1971, the obesity of the Offspring Cohort of the Framingham Heart Study was 14%. By the year 2001 it was 29% and was continuing to increase. (Obesity was defined as a BMI of 30 or more.) In 2010, in the PLoS article Infectious Disease Modeling of Social Contagion in Networks, Hill et al. took the information from the 7500 members of the Offspring Cohort and used it to formulate an infectious disease model of obesity that they called SISa.

As described in the SISa model, the infectious equation for obesity includes a spontaneous appearance factor. Some percentage of people will spontaneously or automatically become obese in a particular year. In the Offspring Cohort, the rate of spontaneous obesity began at 0.8% in 1971 and has increased to 1.9% in 2001.

The infectious disease model of obesity also includes a remission factor that describes percentage of people who transition from obesity to a BMI below 30. The remission factor was unchanged over 30 years and was about 4% per year.

Finally the model includes an interpersonal transmission rate. That rate has increased over the years, from 0.12% for each obese friend in 1971 to 0.5% per obese friend in 2001. In other words, if a member of the Offspring Cohort had more than four obese friends, he or she would have an increased likelihood of being obese in the next year.

It appears that the more obese friends a person has, the more likely that person is to become obese. It is the absolute number of obese friends that matters, not the percentage of friends who are obese. Conversely, the number of normal-weight friends seems to have no effect on a person's ability to avoid obesity or to recover from obesity once it occurs.

The authors speculate that the increasing prevalence of obesity provides a positive feedback mechanism. People will have more friends who are obese and will become inclined to think that obesity is "normal." When they themselves start gaining weight, they may see no reason to avoid the weight gain because several people they know and respect carry an increased amount of weight.


Interventions
If we live in a society that is becoming increasingly obese, and we want to remain at or attain a normal weight, do we want to avoid making friends who are obese? Obviously not. Perhaps it will be enough to know that having obese friends can subtly influence us to believe that obesity is normal or even necessary for us to fit in with our peers. With a certain amount of effort, perhaps we can learn to accept friends who are obese without compromising our own pursuit of a journey to good health.
Posted by Stargazey at 2:36 PM 10 comments: