The Swedes Are Eating More Butter! 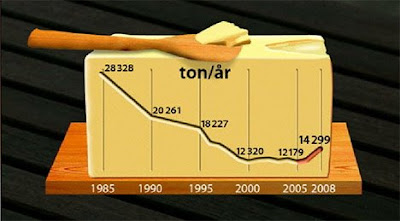 The graph above shows tons of butter (ton/år) sold per year in Sweden. From April 2007 to April 2008, sales of butter in Sweden went up by 13%. Therein lies a tale.

Doctor Annika Dahlqvist was a family practitioner at the Njurunda clinic in Sweden when her daughter, a physician in training, took part in a low-carbohydrate dietary study. The results were so impressive that Dr. Dahlqvist tried the low-carb diet for herself. She was pleased that she was able to lose weight, and she also noticed that her problems with gastrointestinal inflammation and fibromyalgia were significantly improved. She began recommending a low-carb, high-fat (LCHF) diet to her patients who suffered from type 2 diabetes and obesity.

The idea of a low-carb, high-fat way of eating was no more welcome in Sweden than it has been in the United States. In December 2005, the chairman of the Swedish National Association of Dieticians made a formal complaint to the Swedish National Board of Health and Welfare, questioning Dr. Dahlqvist’s low-carb dietary advice and suggesting that it might jeopardize the safety of her patients. Dr. Dahlqvist was threatened with the loss of her medical license.

Although Dr. Dahlqvist’s LCHF diet was quite compatible with a traditional Atkins-type diet, she stopped treating patients and instead began working on a blog and giving lectures to spread the word about LCHF.

Professor Christian Berne, one of Sweden’s leading diabetes experts, had carefully investigated the case against Dr. Dahlqvist and presented his findings to the Swedish National Board of Health and Welfare. He said, “...a low-carbohydrate diet can today be said to be in accordance with science and well-tried experience for reducing [obesity] and type 2 diabetes...a number of trials has shown no effects in the shorter run and that no evidence for it being harmful has emerged in systematic literature researches performed so far. [There is] no scientific support yet for treatments in excess of 1 year. A thorough evaluation of long time treatment results is therefore an important demand on the practitioner.”

By objecting to the low-carb, high-fat diet, the chairman of the Swedish National Association of Dieticians had inadvertently given it validation. In fact, because of the governmental investigation into the scientific support for LCHF, the diet was approved as an alternative approach for the treatment of type 2 diabetes and obesity. New Board guidelines are expected to be completed by autumn of 2009.

As for Dr. Dahlqvist, she continues to lecture, to blog, and to gain in popularity in her native land. In 2008, Radio Västernorrland listeners chose her as Personality of the Year. The seventy percent who voted for her said, “...she stood up against the Health and Welfare and Food Administration's current dietary recommendations, campaigning instead for a diet she believes in—low in carbohydrate but high in natural animal fat.”

Even more impressively, Swedish consumers have started to consider whole milk and butter more natural and healthful than reduced-fat products and are now changing their habits to buy more of the former and less of the latter. There are still plenty of dietary traditionalists in Sweden, but for some people at least, butter is now a health food.
Posted by Stargazey at 11:51 PM

Great post! Would love to know your thoughts on dairy products? I've read a few things that say that even high fat dairy can cause an insulin spike. I love butter and cheese and don't want to give it up but curious on your thoughts?

I haven't a clue about the insulin spike. Let me do some reading and get back to you.

As far as eating dairy products, some low-carbers can and some can't (or they at least have to limit their dairy). Like drinking coffee and using aspartame, the response seems to be an individual thing.

From what I've read today, it appears that the insulin spike from milk protein is somewhat dependent on the digestion rate of the protein in question. Whey protein digests in about an hour and causes more insulin release than an equivalent amount of casein protein, which takes about seven hours to digest.

You mentioned the effect of high fat dairy. Presumably the presence of the fat would delay stomach emptying, but that might not be enough to compensate for the insulin release caused by the branched chain amino acids.

Excellent! thank you so much, you're a wealth of knowledge transforming complicated terms into easy to read :)